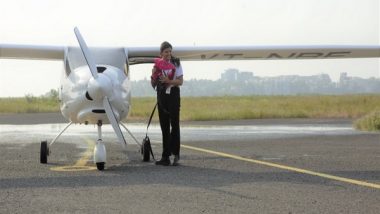 Aarohi Pandit, the world's first woman pilot to cross the Atlantic Ocean and Pacific Ocean solo in a Light-Sport Aircraft (LSA) re-enacted the memorable moment of 1932.

Speaking to ANI, Pandit said, "On October 15, 1932, JRD Tata, known as the father of Indian civil aviation, flown the first-ever flight, a single-engine De Havilland Puss Moth aircraft, from Karachi to Mumbai. To re-enact that wonderful moment today, I had flown a similar aircraft from the Bhuj runway that was built by the women of Madhapar village within 72 hours during the Indo-Pak war and landed at India's first civilian airport in Juhu (Mumbai)."

"This turned out to be a blessing for me to be part of the journey. It was a difficult flight. During the flight, I did not use any GPS or autopilot keeping below 5,000 feet above sea level at all times. As JRD during the first flight brought mails from Karachi, I too brought a letter from women of Kutch with the blessing and loves in it," she added.

After landing at Tata Power hangar at the Juhu Aerodrome, a traditional water salute and reception was also given to the flight.