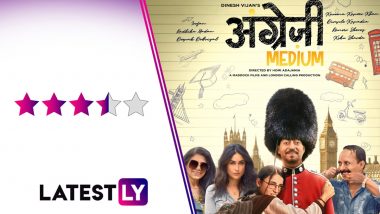 Angrezi Medium Movie Review: In the 2017 film Hindi Medium, Irrfan Khan played a rich businessman in Delhi trying to pass off as a poor man so that his little daughter can get admission in a posh school under quota. In Angrezi Medium, he plays a halwai in Udaipur who has to prove himself as a British citizen so that his daughter can get a seat in a top university there. But before that, he also has to pass himself off as a Pakistani first! Irrfan Khan is the Reason I Did ‘Angrezi Medium', Says Kareena Kapoor.

Confused? So is Champak (Irrfan), since he begins to wonder how to care of his daughter Tarika (Radhika Madan)'s desires of wanting to fly high. A widower, Champak is embroiled in a family feud over their ownership of the name of sweet shop business with his shrewd but good-hearted cousin Ghasiteram (Deepak Dobriyal).

Tarika wants to study in Truford University in London, and thanks to her determination and hard work, she even gets a scholarship there. However, Champak inadvertently ruins her opportunity. Determined to make his daughter happy, Champak tries all options - honest and crooked - to get Tarika admission in the university, which gets us to the scenario where he and Ghasiteram become Pakistani so that they can earn British citizenship!

Hindi Medium, directed by Saket Chaudhary, was the sleeper hit of 2017, with both critics and masses loving the movie. While a light-hearted entertainer, Hindi Medium also served as a satire on the admission process in private schools. For Angrezi Medium, Homi Adajania (Being Cyrus, Cocktail) takes over the reins as the director.

While retaining the idea of making Angrezi Medium a lighthearted entertainer, the writers make the situational humour more absurd-ish and farcical. This could have gone against the film, especially seen in the first act that is particularly shaky. The comedy in these portions, particularly the 'Ghasiteram' name feud subplot, feels forced, and only manages to feel somewhat engaging because the actors involved are so good.

Just when you begin to think that taking admission for this 'Angrezi Medium' feels a bad idea, the film reels you in with the main plotline - the father-daughter relationship and the skewered circumstances that orchestrate their London trip.

Watch the trailer of Angrezi Medium below:

The humour also improves thereon from these portions, even though some of the situations are barely believable. Like how easily Champak manages to get sufficient funds to sponsor Tarika's stay, as well as his own misdemeanors. Or how easily it was for him and Bansal to get second entry in UK with fake passports, after a simple pickle bottle gets them deported the first time. I must add, though, it does lead us to a hilarious Pankaj Tripathi cameo (playing a dubious illegal travel agent), and several laughs over Champak and Ghasiteram trying to be believable Pakistanis. ‘After Angrezi Medium, There Are Plans for a Chinese Medium’, Says Producer Dinesh Vijan.

Even in those unconvincing moments, what shines is how Angrezi Medium puts Champak and Tarika's relationship through the grind and then allows the viewer to savour the heartwarming feeling it exudes towards the end. The writers (Bhavesh Mandalia, Gaurav Shukla, Vinay Chhawall, Sara Bodinar) put a lot of heart in the father-daughter saga, even when the scenes don't bring them together. Champak's guilt, addled with regret of not doing justice to his dead wife, is pretty relatable, which makes his unbelievable antics easier to digest.

Tarika is also portrayed not as an annoying, demanding teenager, but an empathetic character, who just wants to jump out of her father's kuan (well) and live life on her own terms. Tarika is willing to pay on her own for those terms, something her father, who has been protective of her so long, is horrified to hear.

Here's where Angrezi Medium takes a problematic stance. Through Tarika's NRI friend, and later through the troubled relationship between a UK cop Naina (Kareena Kapoor Khan) and her mother (Dimple Kapadia), the movie doesn't feel like it is a big supporter of kids going independent at the age of 18. Also the fact that Kareena-Dimple portions aren't fleshed out well makes things dicier. That said, the touching manner in which Champak explains why he has a problem with that (did I mention that some of the dialogues are sparkling?), with Irrfan's terrific performance in the scene, makes this offence a forgivable one. The strain in his relationship with his child is played in a convincing manner, being both cutesy and touching. Occasionally, it swerves into sentiments and mush, but never goes overboard with that. Which is exactly why the conclusion to their plotline is winsome, even with the predictable manner it plays out.

Finally, let's talk about why Angrezi Medium isn't as effective as Hindi Medium as a satire. Because, it isn't one. The movie doesn't want to be a whistleblower, because it is more busy being a father-daughter story. That doesn't mean there isn't a message. Angrezi Medium is about educating your girl child and letting her choose her dreams, without you defining them. And it softly permeates that messaging through the laughs and the sentiments. Like Irrfan's character says in the end, 'only if you let go off her finger, will she return to hug you'.

It feels so good to see Irrfan Khan back on screen after a gap, after the actor took the break for treatment and recuperation. But there is no tiredness, no lax seen anywhere in his act, as Irrfan deftly steals your heart with an immensely likeable performance. While giving the viewer plenty of moments to chuckle - watch out for those drunken sessions on the terrace - Irrfan truly shines in the more emotional moments, absolutely knocking it out of the park there!

Radhika Madan excels as the young girl, convincingly blending precociousness and determination in her act. Watch her in the scene at the Heathrow airport when she realises that she is alone and breaks down, scared. Or her wide-eyed admiration as she soaks in the freedom that London offers her. Who can say that's a 25-yo, and not a teenager?

Deepak Dobriyal had a more serious role in Hindi Medium and he was a scene-stealer there. He is funnier in Angrezi Medium, and he is a scene-stealer here too! And what a splendid chemistry he shares with Irrfan Khan! Can someone make a crazy road trip movie with these two, something like Fear and Loathing in Las Vegas?

Fans of Kareena Kapoor Khan would be disappointed with her limited screentime in the film. But even in that small role, Kareena manages to impress us with her versatility. Her scenes with Dimple Kapadia (whose family arc feels borrowed from Dil Chahta Hai with a different tadka) are sufficiently emotional. Angrezi Medium isn't about her character, and Kareena is game to play the 'supporting cast' to the story. Ranvir Shorey, Tillotama Shome and Kiku Sharda do well in their respective parts. Pankaj Tripathi has just one scene, and he is uproariously hilarious there!

- Some Stretches Feel Very Unbelievable Even For A Comedy

- Kareena and Dimple's Screentime Isn't Much

Angrezi Medium shakes off an unsteady setting to deliver a pleasing, feel-good film, with a returning Irrfan using another opportunity to show why we miss the actor's histrionics so much! Enjoyable, funny and touching - this is a father-daughter saga that you should not miss!

(The above story first appeared on LatestLY on Mar 11, 2020 10:51 PM IST. For more news and updates on politics, world, sports, entertainment and lifestyle, log on to our website latestly.com).