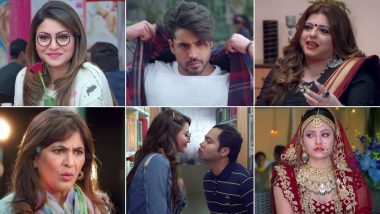 The Urvashi Rautela-starrer "Virgin Bhanupriya" is based on a real-life experience of the upcoming film's director Ajay Lohan, claims Gautam Gulati, who play the male protagonist. The film revolves around a girl named Bhanupriya, played by Urvashi, who is trying her best to lose her virginity but she fails in every attempt. A priest tells her she will never succeed. What happens next is what the story is about. Virgin Bhanupriya Trailer: Urvashi Rautela Steps Into the Hilarious Givings and Misgivings of Being a Late Virgin in the 21st Century (Watch Video)

" 'Virgin Bhanupriya' is a story inspired by a personal experience and friends of our director Ajay. During the shoot, he used to sit with me and help me with the accent of 'Shartiye', which is why I didn't have to learn any language." Is Urvashi Rautela’s Virgin Bhanupriya Inspired by Emma Stone’s 2010 Movie Easy A?

He added: "As this film is based on Ajay's real-life experiences, he has included different characters from among his real-life friends. The interesting bit is that I don't know if I am playing Ajay's character or any of his friends." The film is set to release on the OTT platform Zee5 on July 16.

(The above story first appeared on LatestLY on Jul 13, 2020 04:51 PM IST. For more news and updates on politics, world, sports, entertainment and lifestyle, log on to our website latestly.com).