Licorice Pizza is a coming-of-age drama film directed by Paul Thomas Anderson. It stars Cooper Hoffman and Alana Haim and is playing in theatres right now. 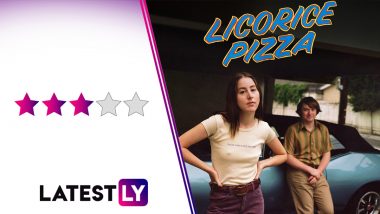 Licorice Pizza Movie Review: PTA (Paul Thomas Anderson) is back after a long break from making films. The Phantom Thread being his last release, he certainly took his time with Licorice Pizza. As a huge admirer and a fan of PTA’s, I was very much looking forward to Licorice Pizza given the cast and how it features the debut of late Philip Seymour Hoffman’s son, Cooper Hoffman. So does Licorice Pizza live up to the hype? Well sort of. Also a bit of warning, mild spoilers will be mentioned. Paul Thomas Anderson's 'Licorice Pizza' to Hit Indian Theatres on Feb 25.

Licorice Pizza is set in 1973 and tells the story about a 15 year old boy falling in love with a 25 year old girl. The romance between them and the nature of will they won’t they is explored throughout the film. Of course the central theme of the film being that, has many creepy and weird subtexts to it, but it treads a fine line between being offensive and a cautionary tale, until it doesn’t, but more on that later.

Alana Haim and Cooper Hoffman make their film debuts here, and honestly they are the strongest parts of this film. Hoffman stars as Gary Valentine, a 15 year old actor who is based on former child actor Gary Goetzman. Following in his father’s footsteps, he puts on a great performance here. Gary is filled with all the excitement of a teenager, and every time he is on screen you can feel it. This is thanks to Hoffman’s charming performance.

Alana Haim also plays the role of Alana Kane, the assistant of a photographer. Another great performance of this movie that really helps sell the troubles of this character. One thing I noticed about Alana is that she claims she is 25 years old, but the movie never goes out of its way to outright say that she is 25 in many ways. There are certain scenes where she mentions she is 28, only to correct herself back. Little instances like these add depth to these characters and really made them speak to me.

Bradley Cooper also is present in the film, while his role is short, he brings in a great amount of excitement to his character. By far one of his most electrifying and unhinged performances.

The story of Licorice Pizza though is where things start going awry. It’s a lot of hits with many misses mixed in. Talking about the hits, the best way to describe Licorice Pizza’s story would be to say that it feels like just people hanging out. It’s extremely similar to Quentin Tarantino’s Once Upon a Time in Hollywood. Focusing on characters just going about their lives, made this entertaining to watch.

It also has a good sense of reaching adulthood and losing that sense of childlike feeling in you. Where you keep growing, but you aren’t able to reach the heights you promised yourself, so you find solace in trying to go back to your life as a child. As a person myself in his early 20s, that aspect spoke to me. This nature is experienced through the character of Alana.

Gary also represents how while being a child, you want to take on more responsibilities and pretend you’re an adult. Again to reiterate, these themes of the characters came off more relatable than I was hoping them to be, and were one of the most compelling parts about the film, so it’s a shame when the movie fumbles its own main message.

Licorice Pizza maintains a good amount of ambiguity to it that doesn’t take the audience for granted and rather lets them guess everything by themselves, but the ending fumbles the landing.

In true PTA fashion, the movie ends on a note that will be controversial for some and extremely captivating for others. For me, it just ended up being controversial. Throughout the movie, we are told that this idea of a relationship is wrong and deeply creepy in many regards, so the ending completely undoes many aspects of that rubbed me the wrong way.

For one where ambiguity could have saved this movie, PTA goes for an ending that tells you the answer and potentially ruins the message that the film is trying to portray.

The ending of Licorice Pizza will make or break the film for many, and for me it’s what stops it from achieving that greatness. Sure it’s an accurate portrayal of the time period where maybe things were more black and white, but it still contradicts the movie’s main message.

The cinematography, the music, the way the characters dress really helps bring the ‘70s Los Angeles vibe alive, but the ending of the movie ultimately drags the experience down. Uncharted Movie Review: Tom Holland, Mark Wahlberg’s Film is a Fun Adaptation of the Popular PlayStation Game! (LatestLY Exclusive).

Also one more thing is there are a few scenes showcasing stereotyping of Asian characters. It just felt downright disrespectful. There could have been a more efficient way to showcase the time period and address these issues, but this wasn’t the way to go.

Licorice Pizza is a weird film in the sense that it really does work until it doesn’t. The ending brings down a rather good film that really embraces its coming-of-age characteristics and helps in giving out profound themes for its specific characters. But overall, Licorice Pizza still manages to be a good time.

(The above story first appeared on LatestLY on Feb 25, 2022 07:26 PM IST. For more news and updates on politics, world, sports, entertainment and lifestyle, log on to our website latestly.com).