While the brothers are quite popular on Tik Tok, we seldom see the wives make a video with them. Sophie Turner surely enjoys being a part of Joe's video from time to time but we have never seen Priyanka or Danielle Jonas make one. 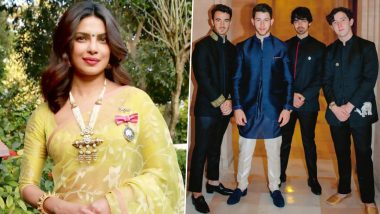 Tik Tok is an entertaining platform where we see artists make fun videos. The Jonas brothers too are a fan of this platform and we often see them make videos on Tik Tok. Priyanka Chopra's hubby Nick Jonas and his brothers - Kevin Jonas, Joe Jonas and Frankie Jonas have been sharing funny Tik Tok video with their fans on Instagram as well and there is no denying the fact that we love to see all of them having some fun, especially when thy act like divas in these videos. Priyanka Chopra Attends Her First Jonas Brothers Concert in Atlanta, Actress Cheers the Terrific Trio – Nick, Kevin and Joe!

While the brothers are quite popular on Tik Tok, we seldom see the wives make a video with them. Sophie Turner surely enjoys being a part of Joe's video from time to time but we have never seen Priyanka or Danielle Jonas make one. PeeCee seems to keep herself away from making crazy videos with them but does have her favourite tik toker amongst the Jonas brothers. The actress recently appeared on Ellen Degeneres' talk show where she was asked about the same and her answer took Ellen by surprise.

Ellen asked Priyanka who was her favourite Jonas brother to follow on Tik Tok. While Ellen thought she won't be able to answer this question, the actress quickly responded and took the youngest brother's name. She said, "That's an easy one. Frankie Jonas. He is everyone's favourite to follow on Tik Tok." Well,, Frankie is quite entertaining on Tik Tok but we wonder how Nick feels about this. Priyanka Chopra Celebrates Jonas Brothers' MTV Video Music Awards Win!

Apart from this, Priyanka is currently basking in the glory of the success of The White Tiger worldwide. Priyanka along with co-stars Rajkummar Rao and Adarsh Gourav have received honourable mentions in the Gold List selections for their powerful performances in the insanely popular Netflix film. Priyanka has received the honourable mention in the category of the best supporting female actor, alongside other stars including Gong Li (Mulan) and Lea Salonga (Yellow Rose).

The White Tiger, directed by Ramin Bahrani, explores India's class struggle and is told from the perspective of Balram (Adarsh), a lower-class citizen who becomes a chauffeur for a rich landlord named Ashok and his wife named Pinky played by Rajkummar and Priyanka respectively. Priyanka is also the executive producer of the film.

(The above story first appeared on LatestLY on Jan 27, 2021 05:15 PM IST. For more news and updates on politics, world, sports, entertainment and lifestyle, log on to our website latestly.com).