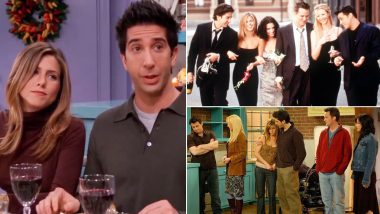 The Friends reunion special is finally happening, and listening to the BG music in the teaser of the special episode brought back so many memories. From the iconic purple door with the yellow frame to the chick and the duck, all Friends fanatics remember even the smallest detail about the show. Of course, we cannot move forward without mentioning the cast of the show who gave us such amazing characters to the world. FRIENDS Reunion Special to Air on HBO Max on May 27.

Jennifer Aniston as Rachel Green, David Schwimmer as Ross Geller, Courtney Cox as Monica Geller, Matthew Perry as Chandler Bing, Liza Kudrow as Pheboe Buffay and Matt LeBlanc as Joey Tribbiani are still remembered for their roles on the show, and everyone is pretty excited to see them reunite again for the special episode. But before we get to see the special episode on May 27, we are revisiting a few shocking moments from the show.

This was one of those moments that we thank Chandler for. He accidentally tells Rachel that Ross loves her fondly while she is unwrapping an expensive gift given to her by Ross. What happens next is another shocking event. While the fans were finally rooting to Rosschel together, Geller is seen returning with Julie from China.

You'd be lying if you say that you did not cry when Chandler proposed to Monica. That was a dream proposal with all the incidents that happened before this special moment. We all hated Richard at that moment, and the way it ended up being so chaotically beautiful, this moment will always be precious for Friends fans.

Ross and Rachel's breakup felt personal to all the fans. While the debate about whether they were or were they not on a break still remain, this moment was heartbreaking. Rachel crying and Ross trying to console her was the lowest moments where everyone thought this was it for them.

While Ross and Rachel were over for good, no one expected Joey and Rachel to kiss. We all knew Rachel had feelings for Rachel but the kiss was very unexpected. Just like Ross on alcohol, we all were pretending to be "fine" with it. Friends Reunion Special: From David Beckham to BTS, Here Is Every Star You Will See in the Episode.

Rachel reveals that she is pregnant but everyone wanted to know who was the father of the child, And the moment when Ross picked up the red sweater, we all had our mouth wide open. This is one of the most epic scenes from the show.

(The above story first appeared on LatestLY on May 14, 2021 12:40 PM IST. For more news and updates on politics, world, sports, entertainment and lifestyle, log on to our website latestly.com).