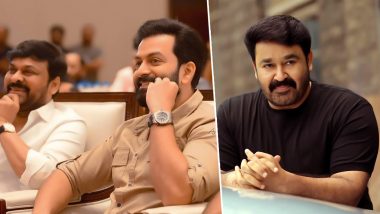 After Sye Raa Narasimha Reddy, Megastar Chiranjeevi's next outing will be the Telugu remake of Mohanlal's Malayalam thriller Lucifer. Chiranjeevi had brought the rights for Lucifer in 2019 itself and had announced the project last year in September. However, while the on-going COVID-19 pandemic has caused a shutdown in the country with regards to television, films and web-series' shootings, it hasn't diminished actor Chiranjeevi's enthusiasm to play Mohanlal's role in Saaho director Sujeeth's next directorial venture. After Sye Raa Narasimha Reddy, Chiranjeevi to Star in Mohanlal’s Lucifer Remake; Will Ram Charan Step Into Prithviraj Sukumaran’s Role?.

As per a report in Filmibeat, Chiranjeevi went on to open up about why he choose Lucifer. The report quoted Chiranjeevi's interview to a 'popular daily' as its source, where the south megastar mentioned that the central character (Stephen Nedumpally) was best suited for his style and personality. Chiranjeevi also went on to call the Prithviraj Sukumaran directorial 'a totally his kind of film.'

Check Out Prithviraj's Announcement Below:

With #Chiranjeevi sir at the Kerala launch of #SyeraNarasimhaReddy What an absolute gem of a man! Humility and grace personified. I’m thrilled that you bought the rights to #Lucifer and will forever be sorry that I couldn’t take up your offer to be part of #SNR sir! 🙏 pic.twitter.com/thGsUoRLAG

Lucifer marked Malayali hunk Prithviraj Sukumaran's directorial debut in 2019. The thriller saw Mohanlal, Vivek Oberoi, Manju Warrier, Tovino Thomas, Indrajith Sukumaran, Saniya Iyappan, Saikumar, Kalabhavan Shajohn and Nyla Usha along with Prithviraj himself in an extended cameo role. Lucifer is touted to be one of the most expensive Malayalam films to be made. Saaho Director Sujeeth Hits Jackpot; Roped in to Direct Chiranjeevi In Malayalam Blockbuster Lucifer's Telugu Remake.

If sources are to be believed, Lucifer remake will see Allu Arjun in the role of Zayed Masood. There were also reports of Ram Charan being offered this part. It can be recalled that Lucifer's Telugu-dubbed version did not work well in Andhra Pradesh. But looks like that will change with the remake considering Sujeeth has been reportedly making changes to the remake to cater to the sensibilities and expectations of the Telugu audience. Shooting for Lucifer's remake is said to begin once the Coronavirus pandemic is controlled and the situation in the country stabilises.

(The above story first appeared on LatestLY on Apr 18, 2020 11:52 AM IST. For more news and updates on politics, world, sports, entertainment and lifestyle, log on to our website latestly.com).