Team Latestly also watched the film and have shared their insight into what they feel the film is like. An excerpt of our review reads, "Master and Petta have some commonalities, which includes actors like Sethupathi and Malavika Mohanan." 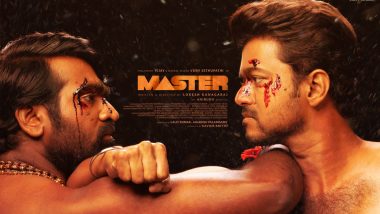 Master starring Thalapathy Vijay, Malavika Mohanan, Vijay Sethupathi has finally made it to the theatres. The film headlined the news for the longest time for one reason or the other. After the speculations whether the film will release in theatres or not, the Vijay starrer is seeing a lot of audiences finally enjoying the action drama in cinemas. Directed by Lokesh Kanagaraj, the film features Vijay and an alcoholic teacher and things change for him when he starts teaching in a correctional facility and has some sort of self relaisation. He then takes on the brawler who is abusing these children to further his criminal empire. The film saw the light of the day after almost 10 months from its original release date and the masala thriller has got a thumbs up from the fans. Now let us see what others have to say about the film: Master Movie Review: Thalapathy Vijay and Vijay Sethupathi Take Their Sweet Time To Come to Blows in Lokesh Kanagaraj’s Tiresome Entertainer.

Times Of India:  Like any good filmmaker, Lokesh Kanagaraj knows that it takes a fearsome antagonist to turn a protagonist into a hero. Just like Petta, Master sees a new-age filmmaker trying his hand at the commercial cinema with a mass hero. Lokesh Kanagaraj manages to pass the test, even if Master is more a Vijay film than a Lokesh Kanagaraj film. What Lokesh brings to the film is filmmaking flair.

The Hindu: At three hours long, the relatively simple storyline needed more spunk, more detailing… and definitely a twist or two more. Master is the best-soundtracked big-budget Tamil film in recent memory, and Anirudh Ravichander should rightly walk away with all the plaudits. Several songs from the album are already chart-toppers, but Anirudh’s background score is the real winner here. Master Quick Movie Review: Thalapathy Vijay is On a Roll But Vijay Sethupathi Leaves a Better Impact in a Stretched But Enjoyable First Half.

Koimoi: This is a show of the Vijays and worth every single penny you spent for them. Both Sethupathi and Thalapathy are in the best zones. Lokesh Kanagaraj is a one-man army here. As exciting the story looks on paper, he tried his best to translate it on the screen. With the help of cinematographer Sathyan Sooryan, he manages to visually divide his story into two different worlds. Master is not the best or most perfect, but it is entertaining. It has the masala.

Team Latestly also watched the film and have shared their insight into what they feel the film is like. An excerpt of our review reads, "Master and Petta have some commonalities, which includes actors like Sethupathi and Malavika Mohanan. At least in terms of how it uses these two actors, Master fares better than Petta. While Sethupathi was also a villain in the Rajinikanth starrer, he had more scope to shine in Master, and it is the scenes involving this incredible actor that makes for the film's more engaging portions, thanks to his irreverent dialogue delivery."

(The above story first appeared on LatestLY on Jan 13, 2021 03:04 PM IST. For more news and updates on politics, world, sports, entertainment and lifestyle, log on to our website latestly.com).