Bigg Boss 13 Promo Making: Surbhi Jyoti and Karan Wahi Are Totally Star-Struck By Salman Khan and So Are We! (Watch Video) 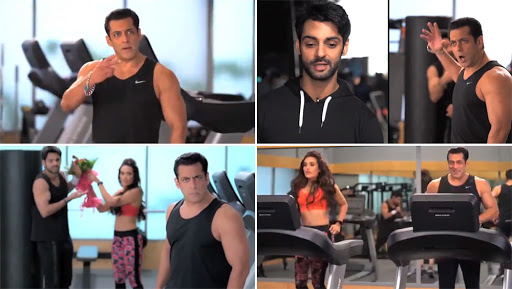 Bigg Boss 13 is just around the corner. The fans recently received a triple treat from the makers as the promo featured TV stars Surbhi Jyoti, Karan Wahi and also, of course, Salman Khan! The fans of the superstar love anything and everything that features him, so how can they not enjoy this fun making- video of the promo?  The channel released a BTS video of him shooting with the TV actors who were just star-struck by his presence. Bigg Boss 13 New Promo: Salman Khan Flirts With Surbhi Jyoti, Leaves Karan Wahi Upset (Watch Video)

The Naagin 3 actress was overwhelmed to share screen space with Dabangg Khan. In the video, she expressed how she was glad to work with him and how she could not take her eyes off him. On the other hand, Karan thought it was a very 'o my godish' kind of feeling to work with him.

Take A Look At The Video Below:

Here are @SurbhiJtweets and @karan009wahi talking about their experience of being a part of the #BiggBoss13 promo alongside superstar @BeingSalmanKhan!

The video shows Salman Khan giving different takes while delivering his dialogues in his swagger style. It is indeed fun to watch him practice and give the final shot with much ease. Yet again after multiple rumours of how Salman was not keen on hosting Bigg Boss, the superstar is back to where he belongs. Also, for those who have come in late, this time, Bigg Boss will be filmed in Filmcity, Goregaon instead of Lonavala and is scheduled to begin somewhere between September end to October first week.