Sai will decide to leave the house and that is when Sai’s bus will meet with an accident and she will be assumed dead! 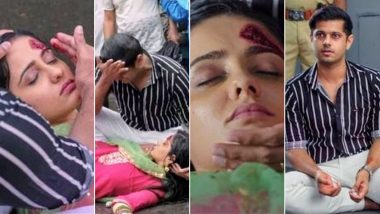 Star Plus show Ghum Hai Kisikey Pyaar Meiin has become a controversial show with the recent track. We already reported that Pakhi will get arrested after claiming her complete right on the child. The Chavans will now be disappointed with Pakhi’s betrayal but at the same time, they will have mixed feelings for her. Ghum Hai Kisikey Pyaar Meiin New Promo: Virat and Pakhi Live Together While Sai Stays Away With Her Daughter (Watch Video).

Pakhi will be in jail where she will take advantage of the situation and claim her right on the child. She will be seen asserting that the child needs the mother more than anyone in the world and hence the child has to be with her. Well, the drama will hit a notch higher now where Sai will be seen taking Vinayak and leaving for Gadchiroli but in a storyline will switch wherein Sai’s bus will meet with an accident and she will be assumed dead! Ghum Hai Kisikey Pyaar Meiin Spoiler Update: Pakhi Uses Her Trump Card in Jail; Claims Complete Right on Her Child in Star Plus’ Popular Show!

This is when Virat will bail Pakhi out as Vinayak will survive the accident and will not be able to take care of him alone. We reported that the show will soon take a leap where Pakhi will have a son and will be living a happy married life while Sai will be parenting her daughter.

(The above story first appeared on LatestLY on Aug 11, 2022 05:07 PM IST. For more news and updates on politics, world, sports, entertainment and lifestyle, log on to our website latestly.com).