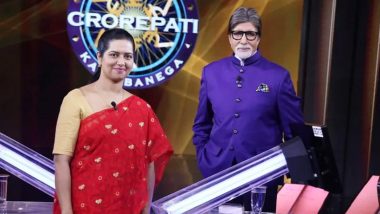 One of the most loved quiz show on Indian television Kaun Banega Crorepati 12 saw something extraordinary on its Thursday (Oct 15) episode. As a contestant named Runa Saha made history by becoming the first contestant to reach hot seat without playing the fastest finger first round. Yes, the miracle happened all thanks to the host Amitabh Bachchan. It had so happened that Runa was the last contestant left for this week. And so, Big B called her directly to the hot seat without going through fastest finger first. This decision made by the megastar made her emotional on the show's set. KBC 12: Here's What To Expect From The New Season Of Amitabh Bachchan's Show And Where To Watch It.

Since there were no participants left to play the fastest finger first round with her, Runa Saha was called to play the game directly.  Earlier, Saha had lost twice in a row in the fastest finger round. On Thursday's episode, we saw Runa surpassing the Rs 10,000 question and then becoming a roll-over contestant. In the clip below, we see her reaching Rs 50 lacs question. Well, that has piqued our interest. Kaun Banega Crorepati 12 Episode 1 Review: Amitabh Bachchan’s Quiz Show Is Off to a Great Start in The New Normal.

Runa Shah, a 42-year-old housewife and entrepreneur hails from Kolkata and owns a saree business along with her sister-in-law. She has a daughter who is studying MBBS. It is from the year 2001, that she has been trying to be a part of the quiz show. According to her, this show will help her to earn respect and recognition in the society. Stay tuned!

(The above story first appeared on LatestLY on Oct 16, 2020 09:28 PM IST. For more news and updates on politics, world, sports, entertainment and lifestyle, log on to our website latestly.com).