Mismatched is a series based on campus drama, that's based on Sandhya Menon's book When Dimple Met Rishi. It stars Prajakta Koli and Rohit Saraf in the lead roles, along with Rannvijay Singh and Vidya Malavade. Mismatched is streaming on Netflix. 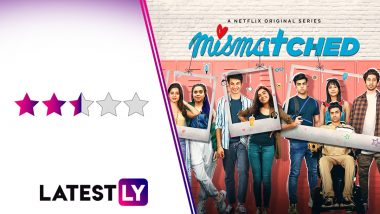 Mismatched Season 1 Review: To be fair, Mismatched, Netflix's new offering, is better than many of the web-series we have currently on campus stories and teenagers. While it tends to take cliched routes, Mismatched, directed by Nipun Dharmadhikari and Akarsh Khurana and based on Sandhya Menon's book When Dimple Met Rishi, doesn't use opportunities to get its characters take of their clothes at any moment, and then get them to indulge in gratuitous sex scenes. It actually deals with frustrations and peer pressures dealt by the youth, while also not avoiding discussing their raging hormones, but never going overboard with that. Mismatched Trailer: Prajakta Koli And Rohit Saraf’s Netflix Drama Involves Friendships, Romance, Career And Much More!

Just like the title of the review suggests, Mismatched felt like Hip Hip Hurray for this new generation. Whereas characters like Zeenat (Vidya Malvade) represents the '90s generation, trying to figure out what this gen is talking about, and getting to fit in there. Or you can be Sid (Rannvijay Singh), who just don't care a damn, and is cool with the ongoings. Mismatched may be about the millenials, but the feelings it delves in can be understood for some more generations across. You don't really need to have FOMO while watching it!

The protagonist of the show is the geeky Dimple Ahuja from Ambala (Prajakta Kilo). An intelligent wannabe coder with a passion for gaming (have to admit, sexy combo), Dimple is harangued by her mother who insists she look better than what God gave her so that she can find a good match. BTW, she is just 17.

Dimple gets admission for a three-month exclusive app developing course in a university in Jaipur. that for its Rs 1.4 lakh admission fee, can't even offer proper toilet facilities. Thinking she is finally free of her mother's arranged marriage talks, Dimple is in for a shock when Rishi Shekhawat (Rohit Saraf) lands there to meet his 'future wife' - her.

Now if you are curious to know why Rishi, still in teens himself and comes from an affluent family, is so in urgency to get married, he is inspired by his grandparents' long, happy married life (till his grandpa passed away). They got married in their teens, while his parents, who married in their '30s, are now separated. Thank God, his grandparents didn't marry as children, otherwise we would have had Netflix's version of Balika Vadhu.

Anyway, Mismatched veers away from turning into that, as we get to know more about Dimple's course and her classmates. There is Celina Matthews (Muskkaan Jaferi), her tomboyish, violet-haired roommate, with a secret of her own.

There is Harsh Agarwal (Vihaan Samat), an NRI boy who came to Jaipur to spend summer with his grandparents but takes up the course as an excuse to use university's WiFi. We have Anmol Malhotra (Taaruk Raina), a brash gamer, who is presently high on frustration after an accident left him wheelchair-bound. His best friend Krish (Abhinav Sharma) is like a sidekick, equally arrogant and rude, while Krish's vain girlfriend Simran (Kritika Bharadwaj) is Insta obsessed. Prajakta Koli Makes Acting Debut with Short Film ‘Khayali Pulav’.

There is also Zeenat, the oldest student in the class, who has decided to take up the course after her husband's demise. The course is taught by Sid, who is a celeb among the coders, and enjoys a joint in his discreet time. Rishi and his bestie Namrata (Devyani Shorey) also join the course, though when they applied for it, I am not sure since Rishi only came to the university to meet Zeenat. Guess that's why big bucks are for!

Sid pairs them up in a team of two, and tells them that whichever team makes the best app would get a lucrative internship offer. While not everyone can see each other eye to eye, with Anmol, Krish and Simran already forming the brat pack, their competitive urges heat up. Cue, we see friendships forged, life-lessons learn, romances built up, spats occuring and quite a few hearts and trust broken over the six episodes of the first season.

Mismatched begins off on a great note. The main characters, even if most of them are walk-talking cliques, have this Breakfast Club potential in them to break out of their coatings (glad that it doesn't turn Anmol into a pitiable figure). Some storytelling elements sparkle - like when the students explain their app, while turning into a visual presentation.

The actors are all really good, with Koli (highly confident and fantastic), Muskkaan Jaferi (very natural), Vihaan Samat (approps detached) and Taaruk Raina (dominates the screen everytime he appears) standing out. The veterans - Vidya Malvade and Rannvijay - are very amiable in their roles, and I hope the second season gives us more insight in their backstories or backgrounds.

Rohit Saraf, who was so good is The Sky is Pink and Ludo, however, seems to be stuck in the the same rut throughout the series, though it has more to do with his character being this puppy-love obsessed. That said, his romantic track with Dimple trudges along in a cute manner, till it is horrible undone in the season finale. More on that later.

The first couple of episodes does a decent enough job of setting the storylines and the characters. Sadly, not all of them get to develop much. It feels weird that Dimple, who feels determined from the beginning, would find herself distracted for a gaming contest, right when she knows she has a lot of work to be done. One of the best tracks in the show is that of Namrata developing a crush on Celina, but even its development serves as a plot element for the main love story later on. Krish and Simran's characters are also equally underserved. It is a little annoying to see a show that felt so fresh in the beginning, turn into a melodramatic mesh of romantic entanglements in the second half. I understand that the series may want to live upto its title, but it should be backed by writing that allows flawed decision being blamed on the character rather than on the series.

But the most disappointing is the finale of the season. While I won't say much on this, some of the decisions that the characters take here feel like forced infusion of drama. Even the hotly talked about gaming contest doesn't offer any goose-bumping inducing moments. And less said about that final scene - that reminded me of an infamous Ross Geller moment in FRIENDS - the better!

- Sets Up Characters and Plotlines Nicely

- The Writing in the Second Half

Even with its present era setting, Mismatched gave me the nostalgic feels of watching Hip Hip Hurray and Banegi Apni Baat from the '90s. The series loses some of that niceties as it progresses, but with better writing and focus, the next season could make it a defining show for the young crowds. Mismatched is streaming on Netflix.

(The above story first appeared on LatestLY on Nov 20, 2020 08:47 PM IST. For more news and updates on politics, world, sports, entertainment and lifestyle, log on to our website latestly.com).