Former Mumbai Police Commissioner Rakesh Maria, in his autobiography 'Let Me Say It Now', has said that he made terrorist Ajmal Kasab chant 'Bharat Mata Ki Jai' twice at Metro Junction where killed people during the 26/11 terror attacks. 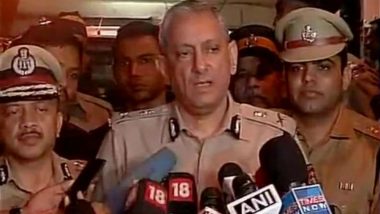 "The convoy came to the Metro Junction, the stretch around which the monster had unleashed death just a few days ago, killing my dear colleagues and innocent fellow citizens… ‘Bend down and touch the ground with your forehead’, I ordered Kasab. Spooked, he meekly followed my instructions. Now, say ‘Bharat Mata Ki Jai’, I commanded. ‘Bharat Mata Ki Jai’, said Kasab. Not satisfied with just once, I made him repeat it twice," Maria wrote.

Maria also said that Kasab was taken to a mosque because he would believe Muslims were not allowed to perform namaz in India. "He felt that the azaan he heard five times a day in the crime branch lock up was just a figment of his imagination. When we came to know of this, I instructed Mahale (senior inspector Ramesh Mahale) to take him to the mosque near the Metro Cinema in a vehicle. When he saw namaaz being offered with his own eyes, he was bewildered," he wrote in his book.

Maria also revealed that Dawood Ibrahim's men were entrusted responsibility for killing Kasab. "The reputation of the Mumbai Police, not just my job, was at stake if anything were to happen to him," he wrote, adding that Kasab was given food and water the lunchboxes of police officers after testing.

(The above story first appeared on LatestLY on Feb 19, 2020 12:41 PM IST. For more news and updates on politics, world, sports, entertainment and lifestyle, log on to our website latestly.com).