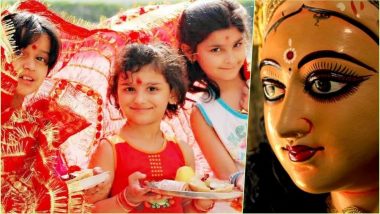 Kanya Puja, also known as Kanjak Puja or Kumari Pujan is one of the important rituals followed during Navratri. The nine-day festival celebrated in honour of Goddess Durga epitomises women power and through Kanya Pujan, devotees show their respect towards the feminine power.  Despite the differences in celebrations, this ritual is religiously followed by people either on Durga Ashtami or Maha Navami. This Sharad Navratri and Durga Puja festival, Ashtami falls on October 17 while Maha Navami will take place on October 18. Devotees who are fasting for nine days can perform the Kanya Puja on either of two auspicious dates. Let us know in detail about Kanya Puja 2018 dates, shubh muhurat (auspicious timings), Kanjak Puja Vidhi, its significance. We will also see what the age of girls should be who are to be worshipped as Maa Durga forms during the puja ceremony. Kanya Puja 2018 on Navratri Ashtami: Kanjak Gift Ideas to Purchase Online for Little Girls for Kumari Puja During Navaratri Festival.

What is Kanya Puja During Navratri Festival? Significance of Kumari Puja

There are several multiple-day festival and events in India but what makes Navratri so very special is that it sees a number of different celebrations on each day. Kanya Puja is one of them. Kanya Puja literally translates to ‘worshipping of girls.’ Navratri celebrations epitomise feminine power and with Kanya Puja, devotees recognise the women power. Nine girls are venerated as an avatar of Maa Durga and venerated during the puja ceremony. Navratri 2018 Puja Vidhi: Ghatasthapana Shubh Muhurat, Puja Items Required, Simple Puja Rituals in Hindi to Perform Navaratri Festival at Home.

The dates for Kanya Puja or Kanjak Puja during Sharad Navratri festival in northern and western states is October 17, Wednesday as well as October 18, Thursday. The two dates are Maha Ashtami (day 8 of Navratri) and Maha Navami (day 9 of Navratri). Devotees who are fasting usually break their fast after performing Kanya Puja. As for people celebrating Durga Puja in eastern parts of the country and in Belur Math, Kumari Puja takes place on Durga Ashtami. When is Durga Ashtami 2018? Shubh Muhurat & Time for Maha Ashtami Puja and Pushpanjali Aarti During Durgotsava.

What Should Be Age of Girls for Kanya Puja?

Navratri is the celebration of Goddess Durga and her nine manifestations. For the Kanya Puja, nine girls are worshipped as avatars of the divine feminine power. According to religious texts and scriptures, ages of girls for Kanjak Puja should be between two to ten years. The nine girls beginning from two-year-old represent a form of Durga. It is as followed – Kumarika (2-year-old), Trimurti (3-year-old), Kalyani (4-year-old), Rohini (5-year-old), Kali (6-year-old), Chandika (7-year-old), Shanbhavi (8-year-old), Durga (9-year-old) and Bhadra or Subhadra (10-year-old). One-year-old toddlers should be avoided.

It is also believed, devotees who are seeking knowledge and to fulfil all their wishes, worship Brahmin girls at the Kanya Pujan. Likewise, those who are seeking wealth and prosperity, revere a girl child from Vaishya family. Those looking for power, name and fame, worship girls from Kshatriya girls.

For Kanya Puja, people sent out an invitation to the nine girls gracing the puja ceremony. On the day, be it Ashtami or Navami, the girls are worshipped like Maa Durga. Their feet are washed with water, vermillion tika is put on their forehead, moli (sacred thread) are tied on their wrist, a red chunni is also offered to them. After this, special food prepared for them are offered. A typical Kanya Puja thali consists of – halwa, puri and kala chana as Ashtami/Navami prasad. After the girls have happily consumed the food, people seek their blessings by touching their feet. They then offer gifts or money to the little girls to conclude the Kanya Puja.

(The above story first appeared on LatestLY on Oct 16, 2018 08:06 PM IST. For more news and updates on politics, world, sports, entertainment and lifestyle, log on to our website latestly.com).