National Immigration Day 2020: Know Date, Significance and the Role of Ellis Island as Immigration Station in the USA 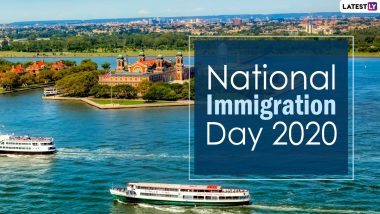 The National Immigration Day is celebrated in the United States of America on October 28, every year. This year it falls on a Tuesday. The first National Immigration day was celebrated on October 28, 1987 when the US Congress formally recognised it. National Pumpkin Day 2020 Facts: Did You Know Pumpkin Is Not the First Jack-o’-Lantern? 7 Interesting Things About the Winter Squash You May Not Have Known!

Before 1890, different states used to regulate their immigration flows individually. The USA then had 42 states.  In 1890, the USA government took the responsibility to centrally control the immigration flow.  In 1892, Ellis Island in New York Harbour was opened an immigrant station and became  the primary port of entry for most immigration into the USA since 1890.  Intersex Awareness Day 2020: What is Intersex? Know Meaning and Definition of Intersexual Gender Identity.

(The above story first appeared on LatestLY on Oct 27, 2020 07:30 PM IST. For more news and updates on politics, world, sports, entertainment and lifestyle, log on to our website latestly.com).