Jellyfish swarms have invaded the popular beaches of Goa including the public's favourite Baga and Calangute. Close to 100 cases have been reported in the last 48 hours of jellyfish stings on these beach belts! Candolim to Sinquerim beach belt saw 10 cases of stings. 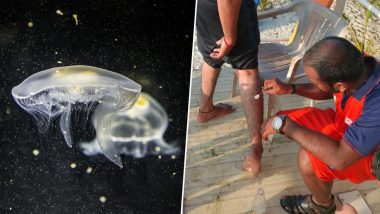 Planning a vacation to Goa for the oncoming holiday season? Then you may have to steer clear of the beaches for a while. The popular beach tourist destination is seeing some not-so-friendly visitors. Jellyfish swarms have invaded the popular beaches of Goa including the public's favourite Baga and Calangute. Close to 100 cases have been reported in the last 48 hours of jellyfish stings on these beach belts! The beach paradise opened for tourism in July and is seeing a lot of tourists flocking here.

As per Drishti Marine, a state government appointed agency that looks after the beaches here, over 90 cases of jellyfish stings have been reported in the last 48 hours. The Baga-Calangute stretch reported about 55 cases while Candolim to Sinquerim saw 10 cases. South Goa reported another 25 cases of jellyfish related accidents seeking first aid. Similar cases were reported in Mumbai's Juhu beach a couple of years ago.

Jellyfish stings can usually be cured with minimal first aid but requires immediate attention. But they can also leave an allergic reaction if ignored for days. As per the agency, one of the cases was a little serious as the man who went parasailing developed chest pain and experienced breathing difficulty after being stung by a jellyfish. "As he was short of breath, oxygen was administered while an ambulance was called for and the victim was rushed to the hospital," the agency said. This incident took place in Baga. Now warnings have been issued for all tourists by the beach about jellyfish swarms in the water.

There are two kinds of jellyfish- toxic and non-toxic ones. The stings can leave an irritation feeling. The common jellyfish are not as dangerous as the bluebottle jellyfish which are also called as the 'Portuguese Man of War.' They leave a whip like rash on stinging and it should be treated immediately.

(The above story first appeared on LatestLY on Nov 20, 2020 09:45 AM IST. For more news and updates on politics, world, sports, entertainment and lifestyle, log on to our website latestly.com).