What the Gross! Woman’s Bizarre Hack to Make Ice Cream Fruit Punch in a Toilet Bowl Will Make You Rethink Your Next Sip, Watch Viral Video (at Your Own Risk!)

In what she calls it a ‘hack,’ the video shows the woman preparing the drink, showing steps to make it inside the toilet bowl. The clip has gone viral on social media, and it will make you rethink your next sip. 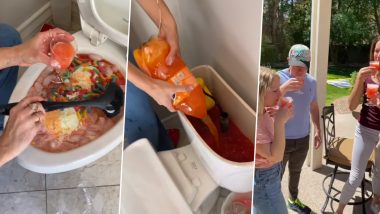 Food hacks can sometime sort your life, but other times, may leave you in disgust. This, is the other time! Will you eat ice cream, if you know it was made in someone’s toilet? If your answer is no, never visiting this woman’s house will probably the best choice. In an absolutely bizarre way, a woman filmed herself while making the otherwise delicious ice cream fruit punch—well, in a toilet seat. You can take a moment to let that sink in! In what she calls it a ‘hack,’ the video shows the woman preparing the drink, showing steps to make it inside the toilet bowl. The clip has gone viral on social media, and it will make you rethink your next sip.

Ice Cream Fruit Punch is a refreshing drink that can be enjoyed anytime. And it is extremely easy to make using readymade fruit juices and ice cream. But certainly not in a toilet bowl (what the gross!). The Anna Show took to Facebook to share the video, with the caption, ‘DIY punch trick… great for parties!’ The woman featured in the clip is capturing making the drink. She put ice cubes in the toilet bowl, followed by candies, soda drinks, and several other sweet treats—and finally ice cream. She pressed the lever to mix all the ingredients, creating the horrendous-looking bathroom concoction which she then scoops up into glasses and then served to her guests.

What happens next? Well, they found out that the drink was made in the toilet. One of them even poured the drink back inside the toilet, where it was made.

Watch the Viral Video (at Your Own Risk!)

It is not known if the video was a prank, or the woman in the clip genuinely thought it was a great ‘hack.’ But according to Garbage Day, she was identified as Taylor Watson—a musician, and she seems to be part of the Facebook group, ‘The Adley Show,’ whose content is centered around pranks and jokes.

(The above story first appeared on LatestLY on Apr 28, 2021 07:43 PM IST. For more news and updates on politics, world, sports, entertainment and lifestyle, log on to our website latestly.com).