Asian Games 2018: India Lose Against Iran to Settle for Silver in Women's Kabaddi

The Indians tried to make a comeback as Sayali took bonus to reduce the margin to two while skipper Payal Chowdhury took another couple of points in the next Indian raid. 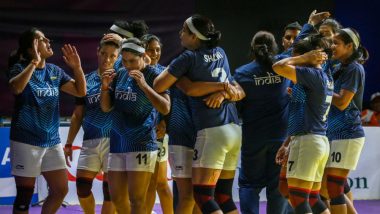 Jakarta, Aug 24: The Indian women's kabaddi team had to settle for silver after a narrow loss to Iran in the final at the 2018 Asian Games here on Friday. The defending champions lost 24-27 in a nail-biting encounter as Iran celebrated its first ever gold medal at the Asiad. This is the first time the Asiad will see a team other than India win the gold medal. The Indians had won both the previous editions since women's kabaddi was included in the Asian Games programme at Guangzhou 2010. This is a historic win for Iran as they now have both their men's and women's teams in the kabaddi finals for the first time. The Iranian women, who took silver at Incheon 2014, will now meet South Korea in the final. The Koreans also have both their men's and women's teams in the finals.

For India, this was a devastating blow, specially after their men's team were outplayed by Iran in Thursday's semi-finals. The first half was a well balanced affair before Iran gradually asserted their supremacy as the match wore on. The Indians enjoyed a slender lead in the initial few minutes before the Iranians gradually found their rhythm. While the Indian defenders struggled to get their act together, the Iran defence was tighter and their attackers reaped rich rewards by repeatedly targeting the bonus line. With the Indians desperate to make a comeback, the match exploded with excitement after the break.

Immediately after the restart, a couple of failed raids and some poor defending by India saw Iran tighten their grip on the match as they inflicted an all out on the defending champions. Kavita then fumbled her tackle which gave away a cheap point to an Iranian raider. The Indians tried to make a comeback as Sayali took bonus to reduce the margin to two while skipper Payal Chowdhury took another couple of points in the next Indian raid.

But consecutive raid points and a successful tackle by Iran maintained their advantage. The Indians continued their attempts to chip away the lead, but the poor defence by the Indians continued to leak points as Iran held on to the three-point lead. An unsuccessful raid by Payal saw Iran increase their lead to four points. The match was set up for a dramatic finish as Sakshi produced a three-point raid to bring the deficit to a single point and give India hope.

But Iran immediately hit back with a point in the very next raid before an unsuccessful Indian raid in the final seconds killed the defending champion's hope of retaining their crown.

(The above story first appeared on LatestLY on Aug 24, 2018 04:08 PM IST. For more news and updates on politics, world, sports, entertainment and lifestyle, log on to our website latestly.com).