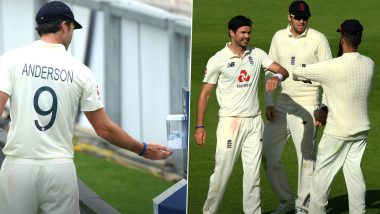 International cricket is on the verge of coming back after more than three months as West Indies and England are set to lock horns in three-match Test series, starting from July 8. However, the games will certainly not be the same as before owing to the COVID-19 scare and the first glimpses of that were seen during England’s intra-squad practice match. Team Ben Stokes are against Team Jos Buttler in a three-day practice match. During the course of the encounter, however, the players made sure that they followed International Cricket Council's (ICC) guidelines for the safe return of the sport. England Intra-Squad Practice Match Free Live Streaming.

Veteran pacer James Anderson didn’t take long in making an impact as he made the ball swing both ways without shining it with saliva. He was the pick of the bowlers for Team Stokes as he took two wickets. However, along with his bowling, the talking point was how he celebrated after taking wickets.

Earlier, players used to hug each other in delight and there were high-fives. However, in order to follow social-distancing, Anderson celebrated his wickets by just gentle elbow touch. In fact, he was also seen using sanitizer in between overs.

Anderson Back In Action!!

Cricket is back and @jimmy9 is taking wickets! 💪

Cricket With A Change!!

It's different, but it's back ❤️🏏 pic.twitter.com/DKFQxRZRam

Well, Anderson was able to move the ball without the usage of saliva. However, the biggest question is how much this change will affect in the match against West Indies. Earlier, many cricketers raise their concern over the issue and urged ICC to come up with an alternative like any artificial substance.

Coming back to the practice match, apart from Anderson, Craig Overton scalped two wickets while Jamie Overton got claimed one wicket. At stumps on Day 1, Team Buttler were 287/5 with skipper Jos Buttler and Sam Curran being on the crease. James Bracey and Dan Lawrence scored half-centuries for the batting side.

(The above story first appeared on LatestLY on Jul 02, 2020 12:47 PM IST. For more news and updates on politics, world, sports, entertainment and lifestyle, log on to our website latestly.com).