Lionel Messi reached his fifth goal for Barcelona as the Catalan giants went on to beat Deportivo Alaves 4-1 at the Camp Nou. As the six-time Ballon d’Or winner achieved the feat, even team Barcelona went on to have a prolific record for themselves. This was the seventh time that Barcelona went on to end the year without any loss at home. 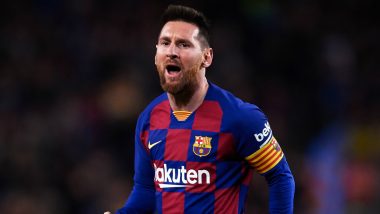 Talking about the game, it was Antonie Greizmann who netted the first goal of the match within the first 15 minutes. Arturo Vidal joined the party with a goal at the 45th minute of the game just before the teams broke for half-time.  Pere Pons from Deportivo Alaves was the lone scorer at the 56th minute of the game. Lionel Messi chipped in with 50th goal for Barcelona and Argentina in one calendar year. Luiz Suares converted a penalty into a goal at the 75 minute and this the team win the game by 4-1.

Now, let’s check out the record of Barcelona below:

The team still leads the La Liga 2019-20 points table with 39 points in their kitty having won 12 games out of 18. The team lost and drew three games each. Real Madrid is on number two with 36 points.

(The above story first appeared on LatestLY on Dec 22, 2019 07:21 PM IST. For more news and updates on politics, world, sports, entertainment and lifestyle, log on to our website latestly.com).