AC Milan vs Roma, Serie A 2019–20 Free Live Streaming Online & Match Time in Indian Time: How to Get Live Telecast of MIL vs ROM on TV & Football Score Updates in IST 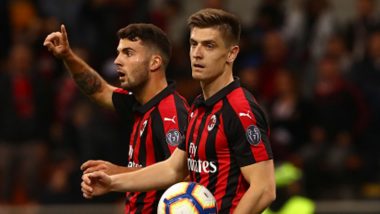 AC Milan will take on Roma in a high-voltage encounter in the on-going Serie A 2019-20. The match will be played on Sunday (June 28) at the Giuseppe Meazza Stadium in Milan. Both the teams have won the one match they played after the restart of the season and will aim to make it two in a row. Milan thrashed Leece 4-1 while Roma defeated Sampdoria 2-1. Meanwhile, if you are searching for the live streaming, live telecast, venue, time and other details of the MIL vs ROM match, you can scroll down to get all the necessary and relevant details. Serie A 2019-20: Title-Chasing Lazio Comes from Behind to Beat Fiorentina 2-1.

Talking about the position of the two teams in the points tally, Roma are placed at the fifth position with 48 points from 27 games. On the other hand, Milan have occupied the seventh position with 39 points from 27 games. So, Roma are way ahead of their opposition but defeating Alessio Romagnoli and Co at their own backyard will not be easy. Also, ace striker Zlatan Ibrahimovic will miss the upcoming encounter due to an injury which is certainly a great piece of news for the visiting team. Now, let’s look at the streaming and other details of the match.

When is AC Milan vs Roma, Serie A 2019-20 Football Match Schedule (Date, Time and Venue Details)?

AC Milan vs Roma match in Serie A will be played on June 28, 2020 (Sunday) at the Giuseppe Meazza Stadium in Milan. The game has a scheduled time of 8:45 pm IST.

Sony Sports is the official broadcaster of Serie A 2019-20 in India. So fans can catch the live action of AC Milan vs Roma on Sony Ten channels.

Where to Get Free Live Streaming Online of AC Milan vs Roma, Serie A 2019-20 Football Match?

With Sony Sports being the official broadcaster, SonyLiv will be streaming the games online, Fans can log onto SonyLiv.com and SonyLiv App to catch the live action of AC Milan vs Roma.

Earlier in the season, the two teams have locked horns once, in October 2019, where Roma came on top with 2-1. So, they would like to extend their winning run while the home team will look to settle the scores.

(The above story first appeared on LatestLY on Jun 28, 2020 07:02 PM IST. For more news and updates on politics, world, sports, entertainment and lifestyle, log on to our website latestly.com).