Solskjaer also ruled Maguire out of the match against Leicester City on Tuesday and admitted that he might be forced into making wholesale changes to his side for the match against Brendan Rodgers’ side. Maguire set a new club record for most consecutive Premier League matches played without missing a single minute of action. 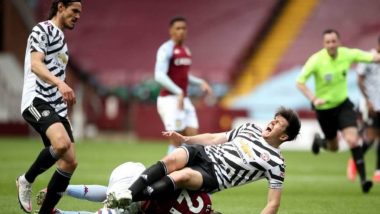 Manchester United could miss captain Harry Maguire for a “few days or few weeks” after the centre-back went off injured in his side’s 3-1 victory over Aston Villa. United manager Ole Gunnar said the club will assess the damage on Maguire’s ankle after scans Monday. Maguire, who set a new club record after making his 72nd consecutive Premier League appearance for United, had to be subbed off in the 79th minute after twisting his ankle. By then United were already ahead with goals from Bruno Fernandes and Mason Greenwood before Edinson Cavani settled the game with a headed goal in the 87th minute.  Aston Villa 1–3 Manchester United, Premier League 2020–21 Result: Bruno Fernandes, Mason Greenwood and Edinson Cavani Score As United Comeback From Behind To Win.

Solskjaer also ruled Maguire out of the match against Leicester City on Tuesday and admitted that he might be forced into making wholesale changes to his side for the match against Brendan Rodgers’ side. Maguire set a new club record for most consecutive Premier League matches played without missing a single minute of action. When he led United out against Villa, Maguire was playing his 72nd consecutive match in the Premier League for Manchester United. Jadon Sancho Transfer News: Manchester United Make Borussia Dortmund Star Their Top Priority.

🔴 Harry Maguire has been subbed off for the first time in his PL career for Man Utd. He had played every minute of all 71 previous games in the competition since his debut for the club in Aug 2019 #AVLMUN pic.twitter.com/L9nSNACG5d

Maguire’s evening though ended in a sour note after he twisted his ankle following a collision with Anwar El Ghazi. He initially returned to the field but slumped soon after and had to be substituted with 11 minutes remaining in the match. Solskjaer revealed Maguire was out of the Leicester clash and said the club can only assess the extent of the injury after scans.

“The boy (El Ghazi) landed on top of him and he twisted his ankle,” Solskjær said at the post-match interview. “Harry has been excellent and it’s almost unheard of, the minutes he’s played without missing him. We’ve a (Europa League) final to look forward to and hopefully, it will be with Harry; it might be a few weeks, it might be a couple of days, we don’t know. Hopefully, it won’t be too bad, but I’m not a doctor, and we’ve got to scan him on Monday,” he added.

“He may be available on Thursday [against Liverpool], but I don’t know, it might be longer. I’ll tell you more on Thursday.” United host Liverpool at Old Trafford on Thursday. The clash was initially scheduled for last Sunday but the match had to be postponed due to fans’ protests inside the stadium.

(The above story first appeared on LatestLY on May 10, 2021 12:36 AM IST. For more news and updates on politics, world, sports, entertainment and lifestyle, log on to our website latestly.com).