Italy vs Spain, UEFA Euro 2020 Semi-Final Live Streaming Online & Match Time in IST: How to Get Live Telecast of ITA vs ESP on TV & Free Football Score Updates in India

Italy and Spain will battle it out at the iconic Wembley Stadium for a place in the finals of the UEFA Euro 2020. Both the teams have played out some pulsating games and this sets up for a mouth-watering first semi-final game of the tournament. While Italy defeated Belgium comprehensively in the previous match, Spain took the penalty shoot-out route to overcome Switzerland 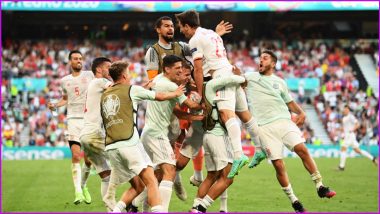 Italy and Spain will battle it out at the iconic Wembley Stadium for a place in the finals of the UEFA Euro 2020. Both the teams have played out some pulsating games in the group stages and knock-out rounds and this sets up for a mouth-watering first semi-final game of the tournament. While Italy defeated Belgium comprehensively in the previous match, Spain took the penalty shoot-out route to overcome Switzerland. Both these teams are slowly reaching the level expected of them after years of underachievement and this has been brilliant to see. Italy vs Spain, Euro 2020: Head-to-Head Record, Team News And Other Things To Know.

Italian star Leonardo Spinazzola damaged his Achilles tendon against Belgium and faces a lengthy spell on the sidelines. Alessandro Florenzi is a doubt for the semis and will undergo a late fitness test to determine his availability for the game. The partnership of Leonardo Bonucci and Giorgio Chiellini has paid rich dividends for Italy and another solid performance is expected of them. Federico Chiesa has managed to keep away Domenico Beradi from the starting eleven and could be preferred again tonight. Ciro Immobile and Lorenzo Insigne have been the unsung heroes for the Azzurri at the Euros and their combinational play could put Spain in danger. Euro 2020 Day 22 Schedule: Today's Match With Kick-Off Time in IST, Upcoming Fixtures.

Aymeric Laporte did not train with the rest of the Spanish squad on Sunday but is expected to start against Italy. Pablo Sarabia suffered a muscle injury against Switzerland and is likely to play no part in the semis. Sergio Busquets is crucial to team’s success as he is the one that makes them tick with his fluid passing range. Upfront Alvaro Morata will continue to lead the attack despite not having the best of time in front of goal.

When is Italy vs Spain, UEFA EURO 2020 Match? Date, Time and Venue Details

Italy vs Spain Euro 2020 quarter-final match will be played on July 07, 2021 (Wednesday) at the Wembley Stadium in London. The match is scheduled to start at 12:30 am IST (Indian Standard Time).

Sony Pictures Networks India is the official broadcaster of UEFA EURO 2020 in India. It will telecast Italy vs Spain, live match on Sony Ten 2 in English, Sony Ten 3 in Hindi, Sony Ten 4 in Tamil and Telugu, Sony Six in Bengali and Malayalam.

The live online streaming of Italy vs Spain, UEFA EURO 2020 football match will be available on the SONY LIV app and website. JIO will also provide the online streaming of the game for its users on the JIO TV app. Italy have the x-factor with them at the moment and they will surely find a way to get past Spain.

(The above story first appeared on LatestLY on Jul 06, 2021 03:15 PM IST. For more news and updates on politics, world, sports, entertainment and lifestyle, log on to our website latestly.com).