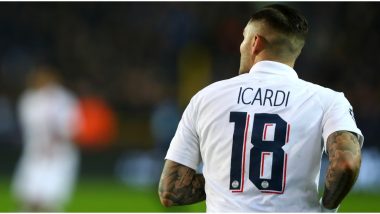 Mauro Icardi will extend his stay at Paris Saint-Germain after the French club agreed to pay Inter Milan a transfer fee of €50 million for the sale of the Argentine striker. Icardi had spent the 2019-20 season on loan at PSG from Inter and will now sign a four-year contract with the French champions. The striker had been in good form for PSG in both the Ligue 1 and the Champions League before the season was disrupted due to the coronavirus outbreak. Ligue 1 was eventually cancelled for the remainder of the season and PSG were declared the winners. Diego Costa, Atletico Madrid Striker, Could Face Six Months in Prison if Proven Guilty in Tax Fraud Case.

Icardi, 27, arrived in Paris on loan last summer and had a buy-out clause of €70 million from Inter, who were looking to off-load the striker in favour of another player. But with the coronavirus pandemic hitting global football, PSG were unwilling to pay full release clause and instead wanted the amount to be reduced while Inter were refusing to budge. The negotiations, however, seemed to have reached a breakthrough with both sides agreeing to the 50 million euros deal plus €7m more in potential add-ons. Juventus Enquired About Possible Transfer of Barcelona’s Frenkie De Jong: Report.

Icardi scored 21 times in his first season at PSG and despite a late dip of form towards December, the forward will now earn €10 million annually in a four-year contract, the same wages given to Edinson Cavani who is expected to leave the club this summer.

The Uruguayan is out of contract at the Parc des Princes next month and had not been offered a new deal. He almost joined Atletico Madrid in January and could still do so after June 30 next month. With Cavani expected to leave, Icardi is all set to become the first-choice striker and will be leading the French champions’ line in Europe when the Champions League resumes next year.

(The above story first appeared on LatestLY on May 30, 2020 11:41 AM IST. For more news and updates on politics, world, sports, entertainment and lifestyle, log on to our website latestly.com).