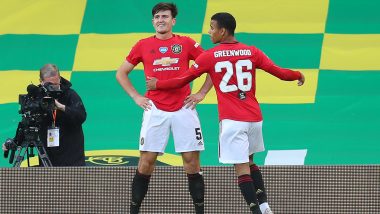 A much-changed Manchester United advanced to the semi-finals of the FA Cup 2019-20 as Ole Gunnar Soskjaer’s men got the better of Norwich City at Carrow Road on Saturday. The Red Devils were tested to the limit by Daniel Farke’s team as they needed a goal from captain Harry Maguire in the dying minutes of the extra time to take a step closer to their first trophy of the season. Anthony Martial’s Hat-Trick Against Sheffield United Ends Disastrous Manchester United Run in Premier League.

It was once again Odion Ighalo who opened the scoring as he netted his fifth goal for the Red Devils in as many matches but Norwich wonder-boy Todd Cantwell came up with a crucial equaliser, 15 minutes from time.

With the game heading into extra-time, the canaries suffered a huge blow as defender Tim Close was shown a straight red in the 89th minute of the game. United pressed hard in the added 30 minutes but were unable to break down a stubborn Norwich side.

The match looked destined to be decided by penalties, but United captain Harry Maguire popped up in the 118th minute of the game to send Solskjaer’s men through to the final four of the tournament.

Now the record English champions will turn their focus towards the Premier League when they travel to Brighton on Tuesday in search of a top-four spot to secure Champions League qualifications for next season. This win extends United's unbeaten run to 14 games.

(The above story first appeared on LatestLY on Jun 28, 2020 09:35 AM IST. For more news and updates on politics, world, sports, entertainment and lifestyle, log on to our website latestly.com).