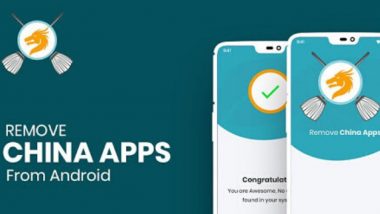 Mumbai, June 3: Remove China Apps has now been taken down from Google Play store. This follows right after the Mitron app, which was touted as Chinese application TikTok's alternative, was also pulled down from Google Play Store. According to an Indian Express report, Google has not confirmed why it has pulled down Remove China App or whether it would be available again or not.

The developer of the app — OneTouchAppLabs announced on Twitter that the app has been suspended from Play store. In addition to this, it further thanked people for their support in the past 2 weeks. Mitron App, Touted as 'Made in India' Alternative of TikTok, Removed From Google Play Store.

Google has suspended our #RemoveChinaApps from google play store.

Thank you all for your support in past 2 weeks.

Remove China Apps application has been designed in such a manner where it lets users delete all applications on their phones that are developed in China. In addition to this, it scans the user’s device and lists the apps with China as their origin. The app also gives the users an option to decide which Chinese app they want to keep or remove. The app had crossed millions of downloads in a very short span of time.

(The above story first appeared on LatestLY on Jun 03, 2020 09:25 AM IST. For more news and updates on politics, world, sports, entertainment and lifestyle, log on to our website latestly.com).