Scientists have discovered in the Milky Way an Earth-sized free-floating rogue planet which does not orbit any star. 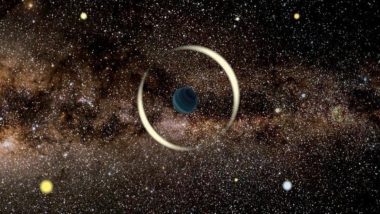 London, Nov 1: Scientists have discovered in the Milky Way an Earth-sized free-floating rogue planet which does not orbit any star.

Rogue planets are a bit uncommon as although many of the known exoplanets discovered so far do not resemble those in our solar system, they have one thing in common -- they all orbit a star.

Polish astronomers from the Astronomical Observatory of the University of Warsaw provided the first evidence for the existence of such planets in the Milky Way a few years ago.

However, the newly-detected planet, detailed in the Astrophysical Journal Letters, is the smallest rogue world ever found, according to the scientists.

Exoplanets can be only rarely directly observed. Usually, astronomers find planets using observations of the light from the planet's host star.

For example, if a planet crosses in front of its parent star's disk, then the observed brightness of the star periodically drops by a small amount causing so called transits.

Astronomers can also measure the motion of the star caused by the planet. Free-floating planets emit virtually no radiation and -- by definition -- they do not orbit any host star, so they cannot be discovered using traditional methods of astrophysical detection.

Microlensing results from Einstein's theory of general relativity -- a massive object (the lens) may bend the light of a bright background object (the source).

The lens' gravity acts as a huge magnifying glass which bends and magnifies the light of distant stars.

Modern surveys hunting for gravitational microlensing events are monitoring hundreds of millions of stars in the Milky Way centre, where the chances of microlensing are highest.

Led by Warsaw University astronomers, the OGLE survey carries out one of such experiments. OGLE is one of the largest and longest sky surveys, it started operations over 28 years ago.

Using this method, the scientists announced the discovery of the shortest-timescale microlensing event ever found, called OGLE-2016-BLG-1928.

"When we first spotted this event, it was clear that it must have been caused by an extremely tiny object," said co-author of the study Radoslaw Poleski from the Astronomical Observatory of the University of Warsaw.

(The above story first appeared on LatestLY on Nov 01, 2020 01:27 PM IST. For more news and updates on politics, world, sports, entertainment and lifestyle, log on to our website latestly.com).