IPL 2021: Lasith Malinga Says ‘Got Many Fans in India, Rest of the World by Playing for Mumbai Indians’

Sri Lanka pacer Lasith Malinga has said that he got many fans in India and the rest of the world by playing for the Indian Premier League (IPL) franchise Mumbai Indians. 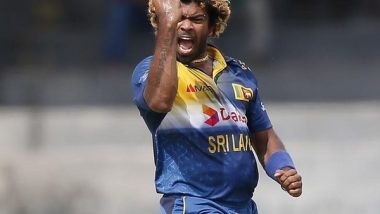 Mumbai, September 19: Sri Lanka pacer Lasith Malinga has said that he got many fans in India and the rest of the world by playing for the Indian Premier League (IPL) franchise Mumbai Indians.

Earlier this week, Malinga had announced his retirement from all forms of cricket. Malinga's stint with MI had ended on a rather memorable note too - with a last ball win that earned Mumbai Indians a record fourth IPL trophy in 2019. Also Read | Manchester United Transfer News: Red Devils Favourites To Sign Jude Bellingham Despite Interest From Premier League Rivals.

"When I played with Mumbai Indians, I got many fans in India and all over the world. I feel all the young cricketers have a dream - to play franchise cricket, especially IPL, and the national team. That is why I want to share my experience with Mumbai Indians, who have an excellent support staff. That is why I want to explain how I entered the IPL team," the official website of Mumbai Indians quoted Malinga as saying. Also Read | IPL 2021 COVID-19 Guidelines: Fans Below 16 Not Allowed Entry at Sharjah Stadium, PCR Coronavirus Report Not Needed in Dubai.

"In 2008, I got the opportunity to put down my name for the auction. After that, I got a call from my manager who told me that I'd got a chance to play with Mumbai Indians that year. He asked me not to worry, and that two other Sri Lankan cricketers were there. He also mentioned that I got good owners - Mr. Mukesh Ambani and Mrs. Nita Ambani," he added.

Talking further, Malinga said: "The manager also mentioned about the team's support staff and the team having the most experienced players of that time. I had only 3.5 years international experience. I felt it was good to go there and get some experience to play for the national team. In 2008, I was really unlucky. First I got a knee injury, then I missed the IPL and I lost the Sri Lankan annual contract."

"In 2009, after one and half years, all the doctors and physios said that if I wanted to play, I would have to start short format games to continue my cricketing journey. It meant that I would have to play T20s. But I didn't get any chance to play in the national team and I had only one option: to go to South Africa and play in the IPL. I explained this to the Sri Lankan Cricket board and they understood the situation. In 2009, I finally went to South Africa to meet my MI team," he added.

Sri Lanka's 2014 T20 World Cup-winning captain Lasith Malinga had announced his retirement from all forms of cricket on Tuesday. Malinga made his Test debut against Australia in July 2004. 16 days after his Test debut, Malinga played his first match in ODI cricket.

Known for his toe-crushing yorkers, Malinga has taken 4 wickets off 4 consecutive balls twice in international cricket. Malinga, who finished with 107 wickets in the shortest format, made his T20I debut against England in June 2006.