Anushka Sharma Wishes Hubby Virat Kohli With A Cuddly Post on 3rd Wedding Anniversary, Says ‘3 Years Of Us & Very Soon, 3 Of Us’

Anushka Sharma and Virat Kohli flew off to Italy to marry in December 2017. And on the eve of their 3rd wedding anniversary, Anushka Sharma took to Instagram to share a super mushy photograph of theirs and wished her hubby. 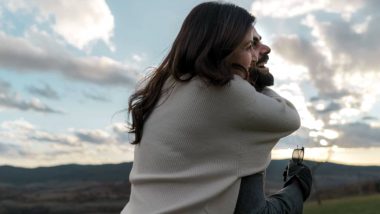 Anushka Sharma and Virat Kohli set the trend of hush hush overseas weddings, when they flew off to Italy to tie the knot in 2017. Their pictures were magical and everyone were crying tears of joy after seeing them. Eversince, both Anushka and Virat have been painting Instagram in the colour of love with their cheesy and adorable posts with each other. Even if its just chilling with a cup of chai on their balcony or going off the grid and trekking in picturesque hills or sitting side by side on the shore of calm lakes, Virushka set internet on fire with ever single post of theirs. Anushka Sharma and Virat Kohli Anniversary: From the First Time They Talked to Each Other to the Baby on Board – A Complete Timeline of This Adorable Love Story.

And on the eve of their 3rd wedding anniversary, Anushka Sharma took to Instagram to share a super mushy photograph of theirs and wished her hubby. She also penned a cute caption, "3 years of us & very soon , 3 of us ❣️ Miss you ❤️" Virat Kohli-Anushka Sharma 3rd Wedding Anniversary Special: 5 Times Indian Cricket Team Captain Displayed Love for his Wife On-field.

While Anushka is back in Mumbai and has resumed work, Virat is currently in Australia prepping with the Men in Blue for the India vs Australia test match that will begin from December 17. However, with his baby due in January 2021, Virat will be returning back to India to be with Anushka. Well, we're already crying tears of joy here! Happy Anniversary Virushka.

(The above story first appeared on LatestLY on Dec 11, 2020 10:55 AM IST. For more news and updates on politics, world, sports, entertainment and lifestyle, log on to our website latestly.com).