Irrfan Khan Birth Anniversary: Did You Know He Had Visited Rajesh Khanna’s House To Fix His Air Conditioner? (Watch Video)

Irrfan Khan’s career spanned for more than three decades and his brilliant works helped him earn numerous prestigious awards including a National Film Award and a Padma Shri too. But before becoming an actor, did you know he had worked as an AC repairman? 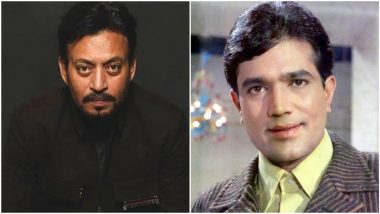 Irrfan Khan was one of the versatile actors of Indian Cinema, a gem gone too soon. His efforts grabbed directors, producers’ attention around the world. One of the international reporters perfectly described the late actor as ‘an enormously valuable bridge between South Asian and Hollywood cinema’. Irrfan’s career spanned for more than three decades and his brilliant works helped him earn numerous prestigious awards including a National Film Award and a Padma Shri too. It all started for Irrfan in 1988 with a role in Salaam Bombay! But it was in the early 2000 that he got his breakthrough. He had done films such as The Warrior (British film), Haasil, Maqbool, The Namesake among others. But before becoming an actor, did you know Irrfan Khan had worked as an AC repairman and he had visited Rajesh Khanna’s house to fix his air conditioner? Babil Khan Is Pressurised As He Shares Pictures of Irrfan Khan Posing With Some of the Biggest Hollywood Stars.

During India Today Unforgettables, while interacting with the veteran Naseeruddin Shah, Irrfan Khan spilled this intriguing detail about his life before stepping into the world of cinema. Shah asked Khan, “When did the acting bug bite you?” To this he replied saying, “I was doing some training in a technical course in Jaipur and I came to Bombay through this training of air conditioning. Then I started going on the field, to different houses to repair air conditioners. This is when I thought that it is so boring. I realised I cannot earn money just for the sake of earning money, it has to be the by-product. I have to be fascinated with what I am doing.”

Naseeruddin Shah further asked, “Do you remember whose house you went to, to fix the air conditioner?” Irrfan Khan, who couldn’t control his laughter immediately said, “Rajesh Khanna. I still remember the way bai opened the door she said ‘kaun?’ I said ‘AC wala’ and she replied ‘Aaiye’. Then I went to Jaipur and thought that “mai air conditioning seekh jaunga then mai bahar jaaunga. I used to think jo bahar jaata hai usko paisa hi milta hai.” Pankaj Tripathi Reveals Irrfan Khan Is The Only Actor Whose Movies He Watches To Get Inspired!

Irrfan Khan has made Indian Cinema proud. His last appearance was in Angrezi Medium, the sequel of Hindi Medium. He was posthumously awarded the Filmfare Lifetime Achievement Award in 2021. Irrfan Khan, the legend, will always live in our hearts.

(The above story first appeared on LatestLY on Jan 07, 2022 08:20 AM IST. For more news and updates on politics, world, sports, entertainment and lifestyle, log on to our website latestly.com).