Shweta Pandit Birthday Special: Aankhein Khuli, Halla Re And Other Songs of The Bollywood Singer That Prove Her Talent Is Unmatched! 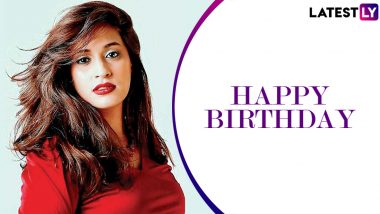 Bollywood movies and songs go hand-in-hand! Imagine a Hindi flick without a melody... well, it's quite hard to digest. Having said that, while stars play as the face of a film, a singer can be termed as the soul behind the tunes played in a flick. One such Bollywood gem known for her voice is Shweta Pandit. It was at the age of 14 when she bagged Yash Raj Film's Mohabbatein (2000) in which she sang five songs. She was chosen to sing in the film after she auditioned for the final selection amongst several singers. Later her career saw a peak and she was signed for many films. Coronavirus Effect: Bollywood Singer Shweta Pandit is Stuck in Italy with her Husband, Gives an Update on the Scary Scenario in the Country.

On July 7, 2020, Shweta turns a year older and celebrates her 34th birthday on the day. And so on the happy occasion, we thought of compiling top five songs sung by the singer which are unique in their own ways and are loved by fabs across. So, without further ado, let's get started. Sushant Singh Rajput's Demise: Singer Shweta Pandit Exposes Bollywood, Says 'No One from the Fraternity Called to Check On Me' (View Tweets).

In this particular film, as mentioned above Shweta had sung five songs. However, among them, this peppy, as well as a meaningful number, happens to be our favourite.

Starring Tanisha Mukerji, this sexy melody's credit also goes to the birthday girl. She perfectly aces the art of sounding a bit raunchy in this number. Listen below.

Sounding sensuous and how Shweta Pandit gave her fans a peek-a-boo on how talented she is and can literally sing any type of a song with ease. Watch below.

Up next, we have quite a popular song sung by Shweta Pandit wherein she was the voice behind Bollywood babe Katrina Kaif. Check it out.

This one is quite different from the ones mentioned above as the melody is sweet and filled with lots of emotions. Do listen, we bet, it will make you cry for sure.

That's it, guys! These are the top five songs of the Bollywood singer according to us. Not just in B-town, the singer has also sung a few melodies for Telugu and Tamil cinema. Well, looks like Pandit is blessed with a superb talent and we wish her a happy 34th. Stay tuned!

(The above story first appeared on LatestLY on Jul 07, 2020 09:40 AM IST. For more news and updates on politics, world, sports, entertainment and lifestyle, log on to our website latestly.com).