She said that once Jacqueline Fernandez had stopping lip-syncing on a track. This track was crooned by Sona herself. She also pointed out Bhumi and Taapsee's lip-syncing in their sports drama, 'Saand Ki Aankh.' 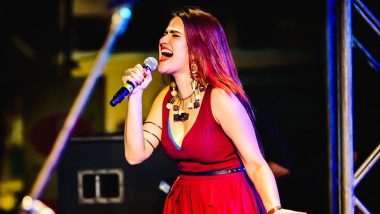 Sona Mohapatra never minces a word when it comes to expressing her opinions. She has been calling out some incidents through tweets and interviews. Now, in her latest interview, she called out actresses Jacqueline Fernandez, Taapsee Pannu and Bhumi Pednekar over the issue of lip-syncing on a song. She mentioned that how the current generation of actors fail to lip-sync with conviction unlike the veteran Bollywood actors. Ram Gopal Varma Offers an Explanation After Sona Mohapatra Slams His For Sexist Remarks On Women Outside Bengaluru Liquor Store.

While speaking with a Bollywoodlife.com , she said that once Jacqueline Fernandez had stopping lip-syncing on a track. This track was crooned by Sona herself. She also pointed out Bhumi and Taapsee's lip-syncing in their sports drama, 'Saand Ki Aankh.'

She was quoted saying, "I would like to ask Bhumi and Taapsee, did you not hear the song (Baby Gold) once before you did a lip-sync because there is no effort to even lip-sync the song in a way ki woh lage ki woh gaana bhi gaa rahe hai (it’d look like they were singing)."

Earlier, Sona expressed strong opinion on the violence that is portrayed on the TikTok app. The controversy that has surrounded the app and its ban is the currently huge. She chipped in with her thoughts and also mentioned Salman Khan's name. 'We grew up with stories of SalmanKhan, breaking bottles on his girlfriends head in public, yet the country’s biggest star? Needs to stop,' read her tweet.

(The above story first appeared on LatestLY on May 20, 2020 04:06 PM IST. For more news and updates on politics, world, sports, entertainment and lifestyle, log on to our website latestly.com).