Mark Henry, WWE Hall of Famer, Signs With AEW As Analyst and Coach

The 49-year old came out to the stage and waved at the crowd, before going back to the locker room. He would be working as analyst and coach with the AEW. 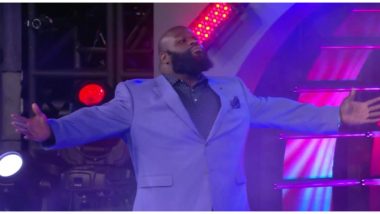 WWE Hall of Famer Mark Henry signed with rival company All Elite Wrestling on Monday, as confirmed by an announcement during the Double or Nothing pay per view. The 49-year old came out to the stage and waved at the crowd, before going back to the locker room. Henry would be one of the analysts for AEW Rampage in August, as stated by American sports announcer Tony Schiavone. John Cena Set To Make WWE Return With Live Fans in July: Reports

Additionally, the former WWE world champion would also be working as a coach to nurture new talent in the AEW. Henry made his WWE debut in 1996 and was inducted into the Hall of Fame in 2018. He had announced his retirement from WWE in 2017 after the completion of Wrestlemania 33.

"The World's Strongest Man" @TheMarkHenry has arrived in #AEW!#AEWDoN pic.twitter.com/pT2TEGqcgx

His last appearance in WWE was during the Legends Night in January 2021. Despite retirement, he had expressed his wish to compete in one last match.

(The above story first appeared on LatestLY on May 31, 2021 02:49 PM IST. For more news and updates on politics, world, sports, entertainment and lifestyle, log on to our website latestly.com).