Jr NTR Birthday Special: From Aadi To RRR – Here’s Looking At The 5 Best Films Of Tarak!

Jr NTR is one of the most sought after Tollywood stars. On the occasion of his 39th birthday, let’s take a look at the five best films of Tarak that have been loved by the audience. 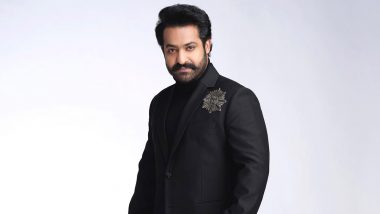 Nandamuri Taraka Rama Rao Jr, but popularly known as Jr NTR or Tarak, is one of the finest gems of Telugu Cinema. In 1997 he starred as a child artiste in Ramayanam and it was in 2001 that he had bagged his first lead role with the film Ninnu Choodalani. In the same year he starred in SS Rajamouli’s Student No 1 and that shot him to fame. It has been more than two decades since he has been a part of the world of cinema and entertaining the audience. Action, romance, comedy, thriller, period drama – you name it and this multifaceted actor has been a part of all the genres. RRR OTT Release Date: Ram Charan, Jr NTR’s Film To Arrive on Netflix and ZEE5 on May 20 Free for Subscribers.

Jr NTR has delivered blockbuster films over the years and the very recent one is RRR. He is one of the most sought after Tollywood stars. On the occasion of his 39th birthday, let’s take a look at the five best films of Tarak that have been loved by the audience.

Tarak plays the titular role in this action drama helmed by VV Vinayak. His character is seen as a fun-loving lad but also an individual who has a hot temperament. It shows how he deals with the injustice done to his family. This film was a turning point in Jr NTR’s career.

Jr NTR’s captivating role as Simhadri, an orphan and good-hearted lad, who gets adopted, left the audience mesmerised. This film helmed by SS Rajamouli and written by V Vijayendra Prasad turned out to be one of the biggest hits of his career.

Jr NTR shared screen space with Mollywood superstar Mohanlal in this Siva Koratala directorial. Tarak, who essays the character Anand, is seen as Mohanlal’s nephew, an environmental activist. Fans were in for a treat to watch the two brilliant actors together on the big screen.

Tollywood’s favourite hero was seen this time in triple role, identical triplets – Jai (a ruthless gangster suffering from dysphemia), Lava (a bank manager) and Kusa (an expert mugger). This film not just garnered praises for Tarak’s impeccable performance, but it was also a huge hit at the box office.

Jr NTR and Ram Charan teamed up for SS Rajamouli’s magnum opus in which they are seen as revolutionary freedom fighters, Komaram Bheem and Alluri Sitarama Raju, respectively. RRR has turned out to be the second highest-grossing film in India this year.

These are the some of the best films of Tollywood’s hero. Here’s wishing Jr NTR a very happy birthday and many more amazing projects in the future!

(The above story first appeared on LatestLY on May 20, 2022 12:01 AM IST. For more news and updates on politics, world, sports, entertainment and lifestyle, log on to our website latestly.com).