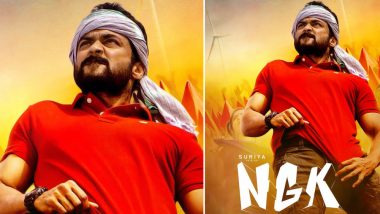 NGK is Suriya’s upcoming political thriller directed by Selvaraghavan. The film’s first look teaser grabbed eyeballs and seeing Suriya’s avatar, fans just can’t wait to watch the film on the big screens. Today (March 5) is the film’s director’s birthday and the team has made it extra special by releasing a brand new poster in which Suriya has nailed the swag of a mass hero. Not just the director, but even the fans are over the moon seeing the superstar’s rugged avatar. NGK Teaser Out: Suriya’s Multiple Shades in This Political Drama Will Leave You Amazed (Watch Video).

The makers of NGK released the film’s first look teaser on February 14. It was supposed to be released in the evening but to avoid it to be leaked before the scheduled time, the teaser was released in the first half of the day. That came out as a huge surprise to many fans of Suriya. The actor’s multiple shades left the fans keep guessing. CONFIRMED! Suriya – Chiyaan Vikram’s Tamil Hit Pithamagan to Remade in Hindi.

Take a look at the brand new poster of NGK:

NGK also stars Sai Pallavi and Rakul Preet in the lead roles. This Tamil-language film will reportedly be dubbed in Telugu-language as NGK: Nandha Gopala Krishna. Produced under the banner of Dream Warrior Pictures, the film’s release date has not been announced yet. But speculations are rife that it could be released by May 2019.

(The above story first appeared on LatestLY on Mar 05, 2019 01:06 PM IST. For more news and updates on politics, world, sports, entertainment and lifestyle, log on to our website latestly.com).