On the work front, Paras Chhabra recently featured in a music video titled Nazaraa alongside his Bigg Boss 13 co-contestant Mahira Sharma. Read on. 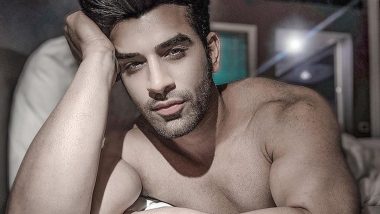 Television actor Paras Chhabra has opened up on whether he is okay with playing the role of a gay person in a film or show. "It totally depends on the script. If the script sounds good to me, I won't mind doing it," Paras said.

The world is celebrating June as Pride Month to mark the achievements of the LGBTQIA+ community. Paras Chhabra FINALLY Opens Up on Allegations That He Harassed Sunny Leone During Splitsvilla 8 (Deets Inside).

Sharing his thoughts on the ongoing Pride month, the Bigg Boss 13 fame TV star said: "Our nation is changing slowly and accepting the LGBTQ community. The purpose of Pride Month is to make our nation the best place for LGBTQ people. We are halfway there and need to do more progress about our mindsets to justify its purpose." Paras Chhabra Birthday Special: 10 Hot Pics of Bigg Boss 13’s Casanova That’ll Drive You Crazy!

"We should show empathy towards them and stop making them feel left out because they are part of us. We all are humans," he added. On the work front, Paras recently featured in a music video titled Nazaraa alongside his Bigg Boss 13 co-contestant Mahira Sharma. The legendary Wadalis, Ustad Puran Chand Wadali and Lakhwinder Wadali, have lent their vocals to the song.

(The above story first appeared on LatestLY on Jun 26, 2021 10:10 PM IST. For more news and updates on politics, world, sports, entertainment and lifestyle, log on to our website latestly.com).