Naagin 5: Hina Khan To Start Shooting For Ekta Kapoor's Show From THIS Date? (Deets Inside) 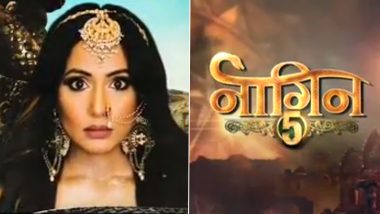 Finally, the cat is out of the bag, as the makers of Naagin 5 unveiled the first promo of the supernatural show and it sees Hina Khan as the shape-shifting serpent. Since season five of the Naagin franchise was announced a lot has been written about who will be seen as the venomous lead. Also, it was a few days back when TV actor Mohit Malhotra had confirmed that Hina is part of the show tp Mumbai Mirror. When quizzed if he is paired opposite Hina, he replied, "Yes, that's true. She and I are good friends, so it feels great to get back with Hina." Naagin 5 Promo: Hina Khan’s Look As The New Shape-Shifting Snake For Ekta Kapoor's Supernatural Show Out (Watch Video).

All that being said, as per a latest report in Pinkvilla hints that Hina will begin to shoot for the show from July 31, 2020. Yep, that is from tomorrow. "After all the checks are in place, Hina will begin to shoot tomorrow. She will be a part of a few episodes," reveals a source to the portal. However, there has been no official confirmation on this. Naagin 5: Is Hina Khan Playing the Venomous Snake in Ekta Kapoor's Supernatural Drama? Fans Are Betting on This! (View Tweets).

Earlier, even Dheeraj Dhoopar had expressed his excitement to be part of the supernatural show to Mumbai Mirror and had said, "Naagin has emerged as a big brand and I didn’t think twice before giving my nod. I am a fan of the hot Naagin ladies... my favourite part of the show is watching them dance."

"It’s going to be challenging because I have only played normal, human characters till now. Also, for a VFX-heavy show like Naagin, you have to pretend act with props, which are later enhanced or replaced on the edit table, so that will be new," he added. Naagin 5 First Teaser Out Now: Creative Director Mukta Dhond Teases Fans (View Poster).

Reports are also doing rounds that just like Karishma Tanna, Hina Khan will be starting a new story on Naagin, which will then be taken forward by Surbhi Chandna. We can't wait to see Hina on the small screen once again. Stay tuned!

(The above story first appeared on LatestLY on Jul 30, 2020 05:28 PM IST. For more news and updates on politics, world, sports, entertainment and lifestyle, log on to our website latestly.com).