The upcoming episode of Taarak Mehta Ka Ooltah Chashmah (TMKOC) will see residents of Gokuldhaam Society stressed out over Popatlal’s sudden disappearance. Just the day before, everyone has agreed to carpool with Sodhi to commute to their offices on the following morning. Read on. 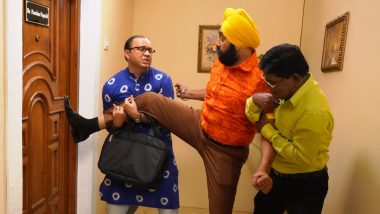 The upcoming episode of Taarak Mehta Ka Ooltah Chashmah (TMKOC) will see residents of Gokuldhaam Society stressed out over Popatlal’s sudden disappearance. Just the day before, everyone has agreed to carpool with Sodhi to commute to their offices on the following morning. But in the morning, after everyone has gathered in the compound to leave, Popatlal fails to show up. After waiting and calling out to him from below his balcony, the purush mandal decide to go to his house to check his whereabouts. After repeatedly knocking on the door when Popatlal does not respond, everyone gets a little worried. Sodhi offers to break open to the door but Bhide stops him. Taarak Mehta Ka Ooltah Chashmah Episode Update: Iyer Takes Up Meditation Until He Heards About the COVID-19 Vaccine, Babita Turns Into Menaka to Distract Him.

The Government has announced relaxations on the lockdown and people have been allowed to attend office wherever WFH is not applicable. This has brought big relief to Gokuldhaamwaasis. Jethaalal, especially is delighted to know that he will be able to go back to Gada Electronics and make up for the lost business. The rest of the purush mandal is equally relieved, if not more to go back to their work the old way.

On the evening before over the routine soda at Abdul’s shop, Sodhi offers to drop everyone off to their offices on his way to Sodhi Garage on the following morning. Since public transport is not yet fully operational, everyone agrees and they decide to meet in the Society compound the next morning to leave together for work. So, the next morning everyone meets in the compound at the agreed time, except Popatlal. Taarak Mehta Ka Ooltah Chashmah Episode Update: Bhide Calls For Society Meeting For Navratri Celebrations, But Goes Missing.

What must have happened? Where has Popatlal gone or has he not gone anywhere but is just not opening the door? Right now, everyone is a slightly worried over Popatlal’s disappearance but little do they know that there is more to it than meets the eye. Of course, there is this, but also, there is a lot of comedy and fun along the way to finding Popatlal. Stay Tuned!

(The above story first appeared on LatestLY on Nov 02, 2020 08:19 PM IST. For more news and updates on politics, world, sports, entertainment and lifestyle, log on to our website latestly.com).