Cinnamon Benefits for Skin: How to Fight Acne and Fade Scars With This Fragrant Spice (Watch Video) 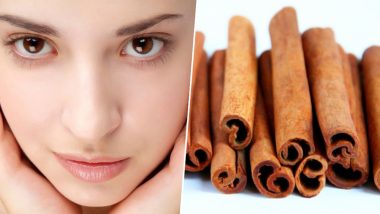 Cinnamon or Dalchini as it is called in Hindi is another staple, fragrant spice that is commonly found in an Indian Kitchen. Usually used to enhance the aroma and taste of spicy and sweet dishes, cinnamon is commonly used as a part of Garam Masala in India. It is also used in masala chai, kheer, sewaiyan and heavy gravies. It is a well-known fact that cinnamon can help you lose belly fat and overall fats in your body because of a compound called cinnamaldehyde found in it, the compound doesn't just give cinnamon its flavour but also helps burn fat. But did you know that Cinnamon also has beauty benefits that might shock you! Cinnamon has been used in the beauty regimen since ages as per Ayurveda. Cinnamon for Weight Loss: This Week’s Home Remedy Will Show You Ways to Use the Spice to Burn Fat.

Here are some of the beauty benefits of Cinnamon:

Helps treat acne: Did you know cinnamon is known to help treat acne? Rich in antibacterial properties, cinnamon can eliminate the bacteria that causes acne.

Works as natural skin scrub: Exfoliation is very important of the skincare routine. Cinnamon powder can act as an amazing scrubbing ingredient. Simple scrub of cinnamon powder and olive oil or any facial oil can do the trick. You can also exfoliate your skin to make it look plumper.

Anti-ageing Skin Benefits:  Did you know that cinnamon has been known to have age-reversing benefits? Packed with powerful antioxidants, vitamins and minerals, cinnamon acts as the best ingredient for youthful skin. Cinnamon is also known to promote blood circulation and leave you with glowing skin.

Keeps Cellulite at bay: Dermatologists from the University of Grenoble acknowledge cinnamon as an effective anti-cellulite natural ingredient. You can either use it on your skin via packs and scrubs or sip on some cinnamon tea.

Here Are Ways To Use Cinnamon:

However, you have to be very careful while using cinnamon for the skin. Remember, cinnamon is very strong and you might want to refrain from using cinnamon directly on the skin always add some kind of carrier oil or facial oil along with cinnamon powder or oil.

(The above story first appeared on LatestLY on May 22, 2019 06:04 PM IST. For more news and updates on politics, world, sports, entertainment and lifestyle, log on to our website latestly.com).