Kim K Brings Back the 'EXPOSED Thongs' Trend with the Recent Pic in a Daringly Low-Cut Black Dress! HOT or NOT? Fans Confused 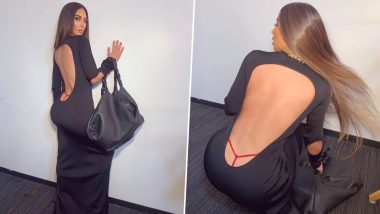 Kim Kardashian shared a recent picture of herself in a daringly low-cut black dress bringing back the "exposed thongs" trend that we believed had died for good. While there is no doubt that Kim K looks super HOT sporting the trend, but are the noughties we really want though? Well, while most people on Instagram couldn't stop praising about hot sexy the 39-year-old looked in what looked like a ‘bring back visible thongs trend’ charade, some couldn't help but wish this doesn't turn into a fad. The picture was basically for Givenchy where Kim gave a shout out the Matthew Williams’ debut collection for the fashion house, but it is the "visible thong" that took away all the attention. Kim Kardashian Oozes Sexiness In a Hot Pink Bikini While Chilling On a Beach (View Pics).

In the picture, Kim K was wearing a form-fitting, floor-length backless dress with cut-outs at the elbows and a back cut that seemed to never end. But where the cut ended popped the bright red thong. The "exposed thongs" trend is also called "noughties" and it was a massive trend decades ago. However, just like the low-rise jeans, people don't want the "visible thongs" trend back. Kim K captioned the pic with, "WOW @matthewmwilliams ✨ Congratulations on your first @givenchyofficial collection! It is such a beautiful collection. I can’t wait to wear all of the looks you’ve sent!!!". Kim Kardashian's ‘Keeping Up With The Kardashians’ Beach House in Malibu Up for Auction, Listed for Around $8 Million.

Take a look at the super-hot picture of Kim K though:

WOW @matthewmwilliams ✨ Congratulations on your first @givenchyofficial collection! It is such a beautiful collection. I can’t wait to wear all of the looks you’ve sent!!! 🖤

Kim Kardashian West has been into a bit of philanthropy recently after she announced that she is donating USD 1 million to Armenia fund.  Kim had visited Armenia twice during the filming of her famous show - 'Keeping Up With the Kardashians,'. Kim Kardashian has been cast in the upcoming animated "PAW Patrol" movie based on the popular children's program, her rep confirmed to Fox News. "Paw Patrol's" tech-savvy Ryder and his CGI-animated team of pups are heading to the movies -- and Kim Kardashian West is coming along for the ride.

(The above story first appeared on LatestLY on Oct 17, 2020 05:52 PM IST. For more news and updates on politics, world, sports, entertainment and lifestyle, log on to our website latestly.com).