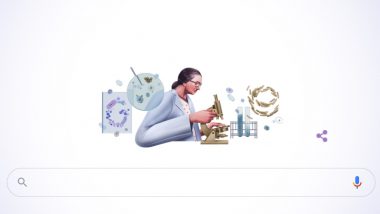 Kamal Samarath, also known as Kamal Ranadive, was born on November 8, 1917, in Pune. She was an Indian biomedical researcher who is known for her research in cancer about the links between cancers and viruses. Dr. Ranadive was also a founder member of the Indian Women Scientists' Association (IWSA). Her father wanted her to study Medicine, but she started her college education at the Fergusson college with Botany and Zoology as her main subjects. Google Doodle Honours Subhadra Kumari Chauhan, India’s First Woman Satyagrahi and Famous Poet, on Her 117th Birth Anniversary.

In 1949, she received a doctorate in cytology, the study of cells, while working as a researcher in the Indian Cancer Research Centre (ICRC). After a fellowship at Johns Hopkins University in Baltimore, Maryland, USA, she returned to Mumbai (then Bombay) and the ICRC. She established the country's first tissue culture laboratory at the ICRC. As the director of the ICRC and a pioneer in animal modelling of cancer development, Ranadive was among the first researchers in India to propose a link between breast cancer and heredity and to identify the links among cancers and certain viruses.

Dr. Ranadive also studied Mycobacterium leprae, the bacterium that causes leprosy, and aided in developing a vaccine. She, along with her 11 colleagues, founded IWSA in 1973. Google, in a statement, wrote, "Ranadive fervently encouraged students and Indian scholars abroad to return to India and put their knowledge to work for their communities. After retiring in 1989, Dr. Ranadive worked in rural communities in Maharashtra, training women as healthcare workers and providing health and nutrition education."

Dr. Ranadive was awarded the Padma Bhusan, the third-highest civilian award, for Medicine, in 1982. She was also awarded the first Silver Jubilee Research Award 1964 of the Medical Council of India. She breathed her last on April 11, 2001, at the age of 84 years.

(The above story first appeared on LatestLY on Nov 08, 2021 09:33 AM IST. For more news and updates on politics, world, sports, entertainment and lifestyle, log on to our website latestly.com).