Shabana Azmi Met With an Accident on Mumbai-Pune Expressway: Humanity Dies on Twitter

A few fell to the extent of tweeting that the actress is no more. Disgusted by the tweets, several prominent personalities and Twitter users rose to the occasion to pin down those wishing ill of the actor. 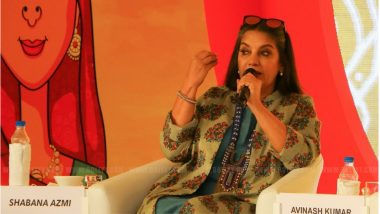 Mumbai, January 18: Hours after Bollywood actress Shabana Azmi met with an accident on the Mumbai-Pune Expressway, Twitter trolls and several users started to speak ill of the injured actor, instead of wishing her a speedy recovery. Multiple tweets brought the actor's political affiliations into the picture, when there was absolutely no need or connection with the matter at hand. A few fell to the extent of tweeting that the actress is no more and started trending 'Karma' hashtag. Disgusted by the tweets, several prominent personalities and Twitter users rose to the occasion to pin down those wishing ill of the actor. Shabana Azmi Car Accident: Lata Mangeshkar, Neena Gupta, Arvind Kejriwal Wish the Veteran Actress a Speedy Recovery.

They said that at this hour, political or other considerations should not come in the way of 'humanity' and the actor's well-being is paramount. However, number of offensive and insensitive tweets about the actor continued to pour in on Twitter. Shabana Azmi Health Update: Veteran Actress is Stable, To be Moved to Ambani Hospital in Mumbai.

Hamid Ansari enjoyed most of executive posts,Vice President twice but at last said-Muslims are scared in India!

What about Shabana Azmi & Jawed Akhtar who support antinationals? https://t.co/UBfGkCRQy8

Since you don't have any counter to Hrithik's lies getting exposed, only one thing for you..Shabana Azmi's hypocrisy has been exposed..more will follow and all bullies will be exposed..it's karma.

Actor Shabana Azmi & her driver got injured in accident on Mumbai-Pune Expressway. Javed Akhtar was also present in the car. Their vehicle was hit by a truck while they were travelling from Pune to Mumbai.#Karma

“As you Sow, So shall you Reap”

However, Few Sensible People Stood Up and Urged People to Stop Hate Messages

Friends, please 🙏🙏🙏...Difference of opinion should never overpower humanity...Let's all together wish for well being and earliest recovery of Shabana Azmi Ji and Javed Akhtar Sahab...Let them get perfectly healthy, fir debate kar lenge...

Sickos hating on Shabana Azmi minutes after she’s been in a terrible road accident- what the fuck happened to your humanity man?

Picture From the Accident Spot

Shabana Azmi has got injured after her car met with an accident on the Mumbai-Pune E-way. Bad accident. Admitted in MGM hospital in Panvel pic.twitter.com/EzBvVeEShb

Azmi was rushed to MGM Hospital after she met with a road accident on the Mumbai-Pune expressway. The incident took place near Khalapur when the car in which she was travelling was hit by a truck. The 69-year-old was also accompanied by her husband and renowned lyricist Javed Akhtar, who escaped from any major injuries. Azmi’s spokesperson said the actor was undergoing a check-up. “She is fine, nothing to worry about,” the spokesperson added.

(The above story first appeared on LatestLY on Jan 18, 2020 07:29 PM IST. For more news and updates on politics, world, sports, entertainment and lifestyle, log on to our website latestly.com).