Viral Videos of the Week: From Wuhan Nightlife to COVID-19 Sniffer Dogs, Here Are 7 Clips That Amazed the Netizens 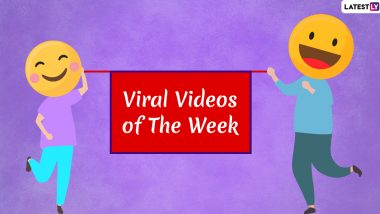 Happy Saturday, everyone! Like every weekend, it is time to sit back, relax and appreciate those viral moments on social media that made our day. While some were cringe, a few were distasteful; there were many that spread a smile in your face. We started off this week by coming across videos of nightclubs packed with people wearing no masks or practising social distancing in Wuhan, as the Chinese city returned back to normal, reporting no new COVID-19 case. We were a bit jealous for sure, but revellers surely enjoyed their time at the night club. On the other hand, there were COVID-19 sniffer dogs deployed at Finland’s Helsinki Airport. In this article, we will look at the seven viral videos of the week that have amazed the netizens.

Photos and videos of packed nightclubs went viral on social media that showed how Wuhan nightlife returned to normal. The revellers were captured back to the dancefloor after no new COVOD-19 cases were reported in the Chinese city.

This was really strange, and even more when it was to award teachers. Yes, teachers at the Russian Teacher of the Year awards had to rub off the glass trophies which very much resembled a phallus.

I dropped my mask & asked my friends to help me get a new one. Im defs protected now. Thank you. pic.twitter.com/mkeZFsmuZS

Since wearing a mask every time you step out of the house is not fun anymore, this woman began horsing around. The woman has filmed herself wearing a horse mask, while she is shopping in a supermarket or playing on a slide in the park wearing the weird mask.

Finland’s Helsinki Airport has deployed specially trained dogs to detect COVID-19 among travellers. At present, it is on a trial basis, and the dogs sniff out the virus within ten minutes with 100 percent accuracy.

They staged a kidnapping to get him out of lectures. This is real friendship goals 😂😂😂😂😂😂😂 pic.twitter.com/zHrFtf7URS

This video of a student who staged a fake kidnapping to bunk online class has made the internet go wild. The clip garnered millions of views online, and his classmates could stop laughing as he faked his kidnapping to skip his virtual class.

For the first time, a rat has won a British charity’s top civilian award for animal bravery, receiving the honour for searching out unexploded landmines in Cambodia. The giant African pouched rat called Magawa, was awarded the PDSA’s Gold Medal for his bravery.

guys look who i saw out on da street!!!:) pic.twitter.com/rPczxbWAkL

A Twitter user shared a video after she spotted a Boston Dynamics’ Spot robot dog roaming on the street. The clip of the four-legged yellow robot ambling down the sidewalk went insanely viral on social media.

These are the seven videos that went viral on the internet, amazing the social media users with its unique, bizarre and strange concepts. We hope you are enjoying your weekend, while keeping the pandemic in mind.

(The above story first appeared on LatestLY on Sep 26, 2020 01:43 PM IST. For more news and updates on politics, world, sports, entertainment and lifestyle, log on to our website latestly.com).