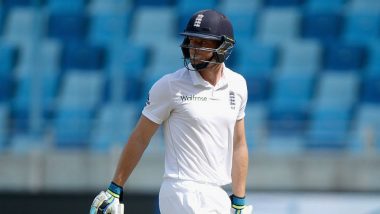 Manchester, July 25: England wicketkeeper Jos Buttler has admitted to feeling stressed about his lack of Test runs in recent times. Buttler has not been among runs in the West Indies Test series until he scored 67 in the first innings of the third Test. Asked if he had been fretting about his place, the 29-year-old Buttler told Sky Sports: "Yes, naturally but I think time in the middle gives you confidence and obviously I hadn't been doing that.

"But I think it's more about doing a job for your team which I'm very aware of and if you are not quite performing as well as you want, you realise you're not doing your job as well as you should be for your team. "I was definitely feeling pressure. I've played long enough now to understand when you're under pressure and it's on your shoulders and how to deal with it." Jos Buttler Sparks Outrage After Expletive-Laden Rant At Vernon Philander, Video Goes Viral on Social Media.

Buttler, a 2019 World Cup winner, also made it clear he realised the importance of a more patient approach in the red-ball game than his aggressive batting style in white-ball cricket.

"The only time I've had success at Test level is when I've trusted my defence. Lots of people expect me to play a certain way because of the way I play in one-day cricket but I've never seen Test cricket in that way," he said.

Meanwhile, Stuart Broad poured cold water on Shannon Gabriel and Kemar Roach's good work with the ball with a quickfire half century as England were bowled out for 369 at Lunch against West Indies on Day 2 of the third Test at Old Trafford here. The three-Test series is currently level at 1-1.

(The above story first appeared on LatestLY on Jul 25, 2020 07:22 PM IST. For more news and updates on politics, world, sports, entertainment and lifestyle, log on to our website latestly.com).