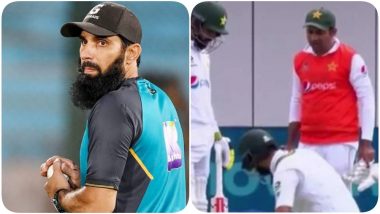 On day two of the first Test match between England and Pakistan, former captain of the Men in Green Sarfaraz Ahmed was seen carrying drinks for the batters. This surely did not go down well with the netizens as the social media was full of tweets reacting on the same. They slammed the management of the team for allowing Sarfraz to be the water boy for the batsmen despite the fact there were juniors who could do the job. They went on to say that the Pakistani team management was mistreating the former captain. Even Shoaib Akhar and Rashid Latif had raised objections about the same. Coach Misbah Ul Haq dismissed all the rumours about mistreating Ahmed and in fact, thanked him for his service. ENG vs PAK 1st Test 2020: Sarfaraz Ahmed, Ex-Pakistan Captain, Carry Drinks; Netizens Slam Team Management for ‘Disrespect’ Towards Senior Player.

He went on to say that Sarfaraz understands the team very well and is a gem of a person. Misbah explained that the former Pakistani captain is well aware of the fact that it is a team game and this is not a matter of disrespect. “When other players are practising outside, so the player who is available has to help out. It is not a matter of disrespect. In fact, it is big of Sarfraz that he doesn’t mind doing it. Plus, it is a sign of a good team,” he said.

Talking about day two of the match, the Pakistani team had scalped four wickets for the score of 92 and put had put up a brilliant batting performance. Mohammad Abbas snapped a couple of wickets for the team and got the wickets of Dominic Sibley and Ben Stokes.

(The above story first appeared on LatestLY on Aug 07, 2020 03:43 PM IST. For more news and updates on politics, world, sports, entertainment and lifestyle, log on to our website latestly.com).