Sachin Tendulkar, in a Video Message, Thanks Fans for the Birthday Wishes

Tendulkar is currently the ‘icon’ of Mumbai Indians franchise in the Indian Premier League 2018 (IPL 2018). 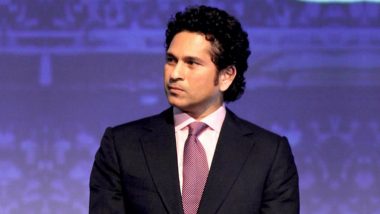 After receiving non-stop wishes for his birthday, Sachin Tendulkar took to social networking sites and thanked his fans. Tendulkar, who celebrated his 4th birthday today, posted a video in which he appreciated fans for all the good wishes. “Thank you for your birthday wishes. I know past 12 am the messages have been pouring in and It means a lot to me. Thank you so very much for all the good wishes,” said Tendulkar.

Tendulkar is currently the ‘icon’ of Mumbai Indians franchise in the Indian Premier League 2018 (IPL 2018). As Mumbai Indians take on Sunrisers Hyderabad tonight at home, Tendulkar in the video added: “I am getting ready actually to go to the stadium in some time. We get to the hotel, have a meeting and then go to the ground. Look forward to seeing you there. Thank you once again for all the good wishes, means a lot to me,” and the Tendulkar signed off.

I cannot thank you all enough for sending so much love to me. It really means a lot! Deeply grateful 🙂 pic.twitter.com/zVkPGMZdXf

Considered as one of the greatest batsmen of all time, Tendulkar is the highest run scorer of all time in international cricket--having notched up 18,426 ODI runs and 15,921 Test cricket runs.

He is the only cricketer to have hit 100 international centuries, and the first to score a double century in ODIs. The Mumbaikar received India's highest civilian award Bharat Ratna in 2014. He is the youngest recipient to date and the first ever sportsperson to receive the award. (With ANI Inputs).

(The above story first appeared on LatestLY on Apr 24, 2018 05:51 PM IST. For more news and updates on politics, world, sports, entertainment and lifestyle, log on to our website latestly.com).