Barcelona resume their Champions League 2020-21 campaign with their club in turmoil following the resignations of president Josep Maria Bartomeu and his board of directors. The club have fared poorly in the field and have been dragged into controversies off it. Juventus, on the other, are missing talismanic Cristiano Ronaldo. 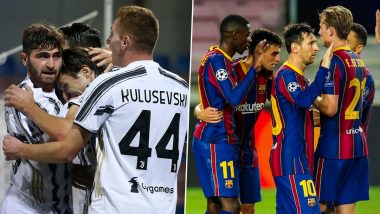 Juventus will aim for consecutive UEFA Champions League wins when they host Barcelona in their second Group G match of UCL 2020-21. Juventus beat Dynamo Kyiv 2-0 in their opening match while Barcelona thrashed Ferencvaros 5-1. But Juventus are unbeaten this season while Barcelona have faced defeats in two of their last three games, which includes the 3-1 El Clasico loss to Real Madrid. Both of Barcelona’s defeats have come in La Liga. Juventus may be unbeaten but are winless in their last three Serie A matches. Meanwhile, fans in India searching for how and where to watch the Juventus vs Barcelona UCL Group G match should scroll down for all details, including free live telecast and live streaming on SonyLiv. Juventus vs Barcelona, UEFA Champions League 2019–20: Lionel Messi, Alvaro Morata and Other Players to Watch Out in JUV vs BAR UCL Group G Match.

Barcelona resume their Champions League 2020-21 campaign with their club in turmoil following the resignations of president Josep Maria Bartomeu and his board of directors. The club have fared poorly in the field and have been dragged into controversies off it. Juventus, on the other, are missing talismanic Cristiano Ronaldo, who is currently in quarantine after testing positive. Barcelona are without centre-back Gerard Pique, who is suspended after seeing a straight red against Ferencvaros. Juventus vs Barcelona Head-to-Head Record: Ahead of UEFA Champions League 2020–21 Group G Clash, Here Are Match Results of Last 5 JUV vs BAR Football Games.

Andrea Pirlo’s side are also missing their centre-back pairing of Giorgio Chiellini and Matthijs de Ligt while midfielder Weston Mckennie is out with COVID-19 positive result. Barcelona will also be without goalkeeper Marc Andre ter Stegen and defender Samuel Umtiti.

Juventus vs Barcelona match in UEFA Champions League 2020-21 will take place on October 29 (Wednesday midnight). The Group G match will be played at the Allianz Stadium in Turin and it is scheduled to start at 01:30 am IST (Indian Standard Time).

Fans in India can catch the live action of Juventus vs Barcelona Group G match on Sony Sports channels. Sony Pictures Sports Network (SPSN) is the official broadcaster for UEFA Champions League 2020-21 in India and fans tune in to Sony Ten 1 and Sony Ten 1 HD channels to catch the live-action of the Group G clash. Those searching for an online option to watch the match live can log into SonyLiv, the OTT of Sony Network. SonyLiv will be live streaming the match online for its fans in India.

(The above story first appeared on LatestLY on Oct 29, 2020 12:57 AM IST. For more news and updates on politics, world, sports, entertainment and lifestyle, log on to our website latestly.com).