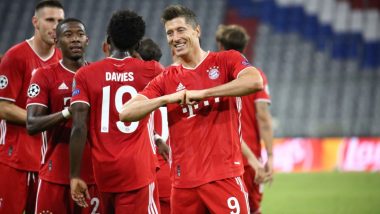 Robert Lewandowski is least interested in breaking Cristiano Ronaldo’s all-time record and instead wants to focus on leading Bayern Munich past Barcelona and into the UEFA Champions League 2019-20 semi-finals. Bayern, who trounced Chelsea 7-1 in the UCL round of 16, face Barcelona in the quarters. Lewandowski scored twice and set up the other two in Bayern's 4-1 win over Chelsea at home. Those two goals have taken his Champions League tally to 13 goals for the season. He is currently four goals behind from equaling Ronaldo’s all-time record of most individual goals scored in a single UCL campaign. Barcelona Always Dangerous, Says Bayern Munich Striker Robert Lewandowski Ahead of UEFA Champions League Quarterfinals.

Ronaldo scored 17 goals in the 2013-14 Champions League, which is the most a player has scored in a single edition of Europe’s top competition. Ronaldo also occupies the first three spots in the elite list of most goals scored in a single UCL campaign. The Juventus star scored 16 goals in 2015-16 and followed it with 15 goals in 2017-18. Messi is fourth in the list with 14 goals in 2011-12. Lewandowski currently has 13 to his name and if Bayern makes it to the final this season, he could easily break Ronaldo’s all-time streak. Lionel Messi Injury Update: Barcelona Coach Quique Setien Confirms Argentine Star Took a ‘Fierce Knock’ on Left Leg During UCL 2019–20 Match Against Napoli.

The Poland international, however, reiterated that personal accolades and milestones are of little value to him when compared it team achievements. "It's not a target for me," Lewandowski told Sky Germany when asked about the record. "We have another knockout game to come and have to play really well as a team.”

For the 31-year-old to beat Ronaldo’s record, Bayern must first cross Barcelona in the quarter-finals and Lewandowski is already preparing for it. "The most important thing is to play well and reach the next round. We have to show as a team we are better [than Barcelona] in order to reach the semi-finals,” he said after his side’s 4-1 win over Chelsea that confirmed their progress into the next round.

Lewandowski broke quite a number of records against Chelsea. The striker overtook Karim Benzema to become the fourth-highest goalscorer in Champions League history with his twin strike on Saturday. He now has 66 goals, one more than Karim Benzema who he beat. Ronaldo leads the overall chart with 130 goals while Messi (115) and Raul (71) complete the top three.

He is also one of only five players to have scored 12 or more goals in a single Champions League edition – the others being Ronaldo, Messi, Ruud van Nistelrooy and former Bayern striker Mario Gomez. Lewandowski also played a direct role in each of the seven goals Bayern scored past Chelsea making him the first player since Luis Figo to score and assist at least three goals against a single opposition in a single Champions League season.

That has taken his goal tally for the season to 52 goals in 44 matches across all competitions. Unsurprisingly, no other players have scored as many in Europe’s top-five leagues this season.

(The above story first appeared on LatestLY on Aug 10, 2020 10:38 AM IST. For more news and updates on politics, world, sports, entertainment and lifestyle, log on to our website latestly.com).