Last Friday, the government informed the Supreme Court that it will reimburse the banks the compound interest on small loans under Rs 2 crore irrespective of whether these borrowers had availed of the moratorium or not, provided the loan was standard as of end-February. 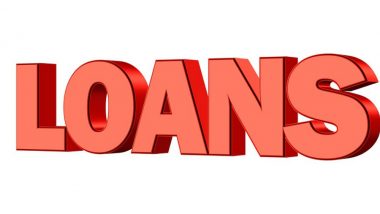 Mumbai, October 26: Over 40 per cent of the system credit and 75 per cent of the borrowers will benefit from the interest-on-interest concession for small loans which will cost the government around Rs 7,500 crore, says a report.

Last Friday, the government informed the Supreme Court that it will reimburse the banks the compound interest on small loans under Rs 2 crore irrespective of whether these borrowers had availed of the moratorium or not, provided the loan was standard as of end-February.

"Such loans account for over 40 per cent of the systemic credit and 75 per cent of borrowers, and the impact on the exchequer is around Rs 7,500 crore," Crisil said in a note on Monday. Loan Moratorium Exceeding Six Months Can Impact Credit Behaviour of Borrowers, RBI Tells Supreme Court.

The cost to the exchequer would be halved if the waiver is allowed only where moratorium, extended due to the pandemic, was availed of, it added. To ensure effective and timely implementation, the government has asked lenders to credit the amount to eligible borrowers latest by November 5. This will be the difference between compound interest and simple interest over the six months of the moratorium period.

While lenders have to apply for reimbursement by December 15, the timelines for receipt of funds from the government are yet to be notified.

According to the agency, a complete interest waiver, including interest on interest, for the eligible loans up to Rs 2 crore would have meant a Rs 1.5-lakh-crore impact and could have posed significant challenges for the government as well as the financial sector. Bank Loan EMIs: RBI Recommends 3-Month Moratorium And Interest Deferment on All Loans Amid COVID-19 Crisis.

From a borrower's perspective, the benefit is relatively higher for those who had availed of higher-yielding loans and thus borrowers of unsecured, micro and gold loans will benefit more than those who had taken home loans.

Loan segments eligible for waiver are MSMEs, education, housing, consumer durables, credit cards, automobile, personal, professional and consumption. According to Crisil, around 60 per cent of eligible loans were under moratorium as of end April, and the same is estimated to have come down to around 30 per cent as of end-August.