Coach of former India cricketer MS Dhoni, Chanchal Bhattacharya endorsed the idea of a farewell match for him as expressed by Jharkhand Chief Minister Hemant Soren. 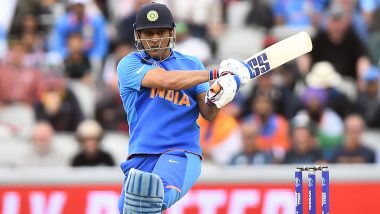 "It is a very good thought expressed by Chief Minister Hemant Soren. Apart from being a Chief Minister, he is also the Sports Minister. BCCI should also agree to this thought and there should be a farewell match for Dhoni at the JSCA stadium in Ranchi," Bhattacharya told ANI.

Jharkhand Chief Minister Hemant Soren has urged the Board of Control for Cricket in India (BCCI) to host a farewell match for former skipper Dhoni, who announced his retirement from international cricket on Saturday. MS Dhoni Retires From International Cricket, Suresh Raina Follows His Footsteps.

Dhoni, who was born and brought in Ranchi, has played domestic cricket for the state (then in Bihar). He had represented Bihar, East Zone and Jharkhand in the domestic circuit.

The 39-year-old played 131 first-class matches and scored 7,038 runs at an average of 36.84. The Chief Minister wants to host a farewell match for the wicketkeeper-batsman in Jharkhand.

"Mahi, who has given many moments of pride and enthusiasm to the country and Jharkhand, has retired from international cricket today. We will not be able to see everyone's favourite Jharkhand-born cricketer in the Blue jersey. But the heart of the countrymen is not full yet," Soren tweeted.

Meanwhile, Bhattacharya expressed sadness that Dhoni would not be a part of the ICC T20 World Cup.

"I am sad that he has retired because it was my personal wish that he should have played the ICC T20 World Cup that was scheduled to be held in the coming days," he said.

"Dhoni gave his 100 per cent to the game. He will play in the upcoming IPL," he added.

Bhattacharya further said that Dhoni's decisions may appear surprising at first glance but they are well thought out and made with the interests of the team and nation in mind.

"I think that his decisions are always well thought out even though it seems that they are made at the spur of the moment. He takes into consideration the interests of the team and country before making any decision," he said. He lauded Dhoni's achievement across all the formats of the game.

"Dhoni is among the most successful captains in the game. He won laurels in all the three formats of cricket and he will be remembered for years to come. Dhoni's fans will miss him," he said

"He had a unique streak about himself. He is a wicketkeeper-batsman and it is tough to bat after keeping for so long while fielding. He is great because of his discipline and that was what I observed in him right from the start," he added.

Dhoni made his ODI debut in 2004 and since then changed the face of Indian cricket with his calm demeanour, sharp understanding of the game, and astute leadership qualities.